Why Rand Paul Is Telling Everyone He's A Fan Of Vaccines 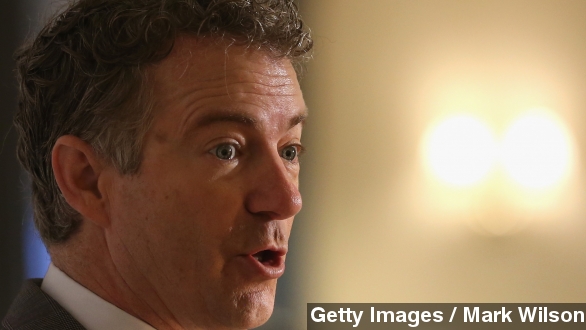 Sen. Rand Paul has spent the last few days saying very loudly that he is not against vaccines.

"I think vaccines are one of the greatest medical breakthroughs that we had. I'm a big fan," Paul told CNBC's Kelly Evans.

He's said it on Twitter, posting: "Today I am getting my booster vaccine. Wonder how the liberal media will misreport this?"

All because, as he told Laura Ingraham, he thinks vaccinating children should be voluntary.

"I'm not anti-vaccine at all, but particularly most of them ought to be voluntary. ... While I think it's a good idea to take the vaccine, I think that's a personal decision for individuals to take and when they take it," Paul said.

His comments come at a time when vaccinations are in the national spotlight, after an outbreak of measles in California. (Video via KNBC)

So, while Paul has been saying he definitely isn't anti-vaccine, his record has come under scrutiny, and The New York Times has found he has been associated with at least one group that is.

The AAPS is opposed to the president's health care reform. It has published discounted studies through its journal claiming abortion raised breast cancer rates, homosexuality shortens lifespans and undocumented immigrants are spreading leprosy — all claims rejected by established scientific bodies.

And when it comes to the issue at hand, a study argued the introduction of the measles, mumps and rubella vaccine in Denmark contributed to increasing rates in autism, a popular argument among those opposed to vaccines.

This is a group that, as recently as 2010, Paul publicly supported, including on Fox News, supporting the AAPS's lawsuit against the Affordable Care Act.

Supporting — what's considered by mainstream medical associations in the U.S. a fringe group — could be risky, especially for a man who is considering running for the presidency in 2016. So the response Wednesday from Paul's spokesman, Brian Darling, was unsurprising.

Darling told The Times, "He agreed with the group when they opposed Obamacare, but I can’t imagine he supports every position they’ve ever taken."