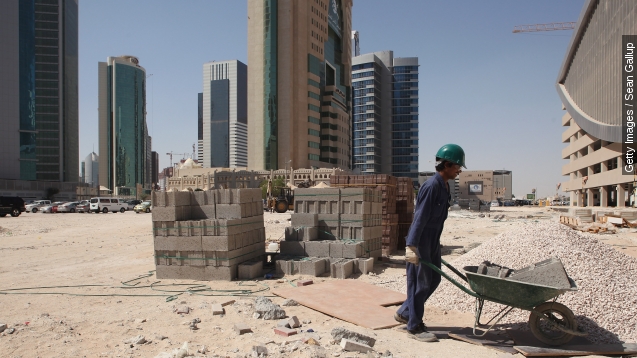 It seems like every week there's more bad press about Qatar as it prepares for the 2022 World Cup.

Last week, there was the BBC reporter who was arrested for investigating migrant workers' living conditions.

"The cameraman, driver, translator and I were treated like spies and interrogated separately by security officers," the BBC's Mark Lobel explained.

Now, Nepalese workers at World Cup work sites have been prevented from going home to attend funerals for those lost in the country's devastating earthquake that killed more than 8,000 people. (Video via The Guardian)

It's shaping up to be one of the most controversial World Cups in history, and yet, current FIFA president Sepp Blatter is widely expected to win re-election in this week's FIFA presidential elections. (Video via The Oxford Union)

"A hairless bear would do less damage as president. A hairless bear, who incidentally looks a great deal like Sepp Blatter," John Oliver mocked on his show "Last Week Tonight."

So how could a man who has presided over countless controversies in his 17-year reign as FIFA president be so confident of re-election he didn't even campaign for it?

As Forbes writer Zach Bergson explains, there are a couple main reasons, the first of which is money.

Money drives a lot of what FIFA, ironically a nonprofit, does, and Sepp Blatter has made the organization a lot of it. (Video via Al Jazeera)

In the last World Cup cycle, Bloomberg reports FIFA grossed some $5.72 billion, and it's paid out $1.56 billion to its member nations for various projects.

But the second reason, Bergson explains, is "the undemocratic nature of the electoral process itself."

At the FIFA congress, every country gets one vote, regardless of size or influence, so tiny Caribbean or Pacific countries that get substantial FIFA payouts have as much say as powerhouses like Brazil or Germany. (Video via Arirang)

FIFA members have been accused of bribing smaller countries for votes in the past, although those allegations haven't been connected to Blatter. (Video via The Telegraph)