Why Putin Is Still Popular At Home Despite A Tanking Economy 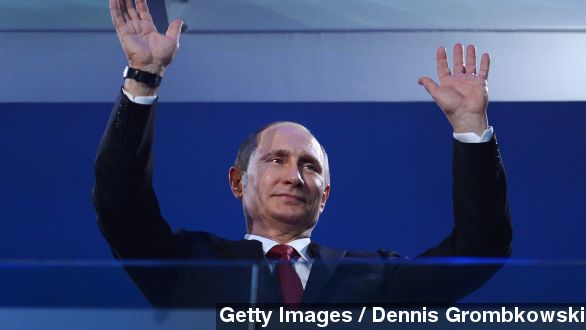 Oil prices are crashing, the value of the ruble has plunged to a historic low and interest rates are soaring. Any one of those things would take a toll on a president's popularity.

But not Vladimir Putin, who just walked away with his 15th straight "Man of the Year" title. To be fair, it was a Kremlin-funded public opinion poll. (Video via RT)

But independent surveys will give you much of the same — approval ratings in Russia well over 80 percent.

Bottom line is, Russians are more supportive of Putin now than they were a year ago, despite a deepening economic crisis at home.

This shouldn't come as a surprise, given the year that Putin's had on the international stage. (Video via Voice of America)

Russian nationalism soared when Putin invaded Crimea and backed the pro-Russian insurgents in Eastern Ukraine. The same happened during conflicts in Chechnya and Georgia.

During his state of the union address earlier this month, Putin remained defiant, blaming his country's economic woes on the West and comparing sanctions to Hitler's invasion of the Soviet Union. (Video via Ukraine Today)

What he didn't mention is that his annexation of Crimea is what prompted Western sanctions in the first place, or that it's Russian consumers who have been hit hardest by his ban on some foreign imports.

As long as he keeps reminding everyday Russians of previous eras of hardship, he won't have to confess his own sins. As Max Fisher at Vox explains, "Putin is trying to persuade Russians that, the worse things get, the more that they should support him and his government."

So far, it seems to be working. An independent poll released last month found half of Russian households saw "practically no problems" in the economy. Thirty-one percent said the problems "weren't too serious."

On Tuesday, Russia raised its interest rate to the highest it's been since 1998 — the year Russia defaulted on its debt.