Why Putin Can't Keep His Top On 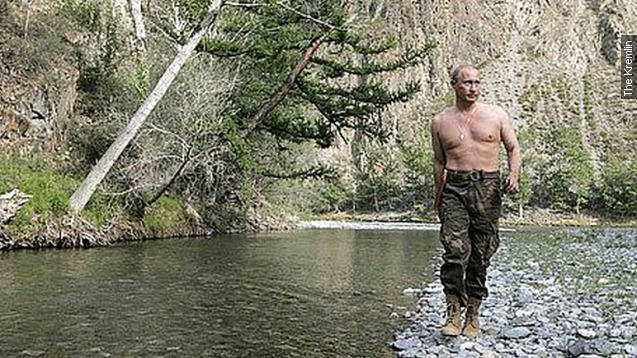 Whether it's racing cars, piloting a plane or shooting whales with a crossbow ...

Putin, and likely his PR team, knows what he's doing.

True, the uber-macho publicity stunts earn him a lot of online ridicule.

But to his comrades, the assertions of his masculinity say: The West can’t mess with this strongman.

You've got to understand the mindset in Russia after the collapse of the Soviet Union. (Video via ITN)

The country, humiliated, was in need of rebranding. (Video via Ronald Reagan Presidential Library and Museum)

His chosen successor, by contrast, was a young, ex-KGB agent bent on restoring Russia's greatness. (Video via CNN)

Historians call what happened next the "remasculinization of Russia." (Video via Kremlin)

Putin crafted a "tough guy with a sensitive side" image. (Video via RT, The Telegraph)

The ice hockey, the baby leopards, the topless encounters with nature — it all played well at home.

This is a country where a quarter of men die before their 55th birthday — thanks in no small part to the country's penchant for vodka.

That's why Putin, now 62, goes out of his way to show he's healthy and in shape. (Video via Kremlin)

Also keep in mind, because there's no obvious succession plan, the Russian state basically depends on him staying healthy. (Video via Kremlin)

Which, we should mention — believe it or not —  are often staged. Putin himself admitted to it.

Even the time he went deep sea diving and just happened upon buried treasure? That too, we're sorry to say, was a lie. (Video via The Telegraph)

But his musical abilities? Now that’s the real deal. (Video via RT)

This video includes an image from Getty Images and images from the Kremlin.