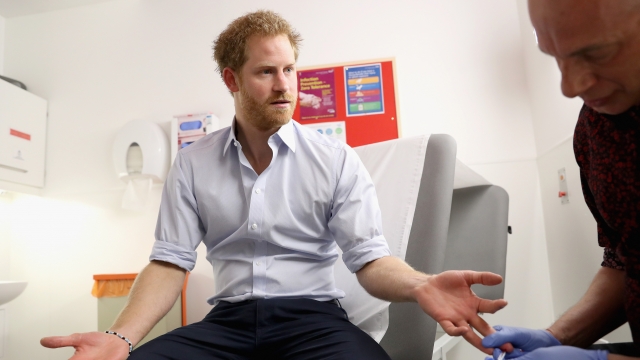 Prince Harry just got tested for HIV. And it was live-streamed on Facebook.

"It's very, very simple. We don't need much blood at all," health adviser Robert Palmer said.

His results were negative, but that's beside the point. His message is simple: Getting tested for HIV should be no big deal.

"So whether you're a man, woman, gay, straight, black, white, whatever — or ginger — why wouldn't you come in and have a test?" Harry said.

"One tragic issue in particular is the shame and stigma linked to HIV. This causes thousands of children to needlessly die each year because they're keeping their illness a secret and not getting the medical attention they need," Prince Harry said.

It's a stigma Harry's mother, the late Princess Diana, also worked to end.

Public Health England estimates more than 100,000 people in the U.K. are living with HIV — and one-fourth of them don't know they're infected.