Why Poverty Isn't A Big Topic On The Campaign Trail 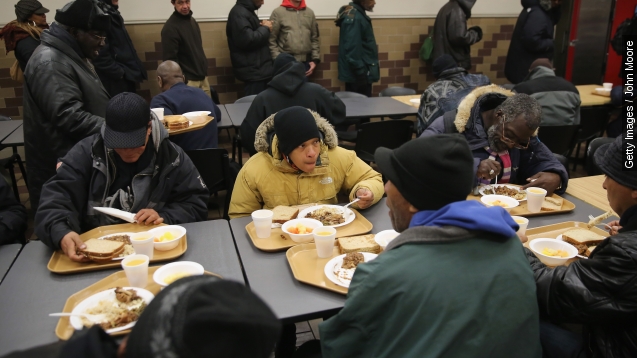 In the first Democratic debate, the issue of American poverty wasn't a big topic. It was mentioned twice. (Video via CNN)

Bernie Sanders broached the subject, saying: "We should not be the country that has the highest rate of childhood poverty of any major country. ... We have 27 million people living in poverty."

It's actually more like 46 million, according to census data, but the point is poverty wasn't exactly central. Same goes for the main Republican debates.

"Social security is meant to be to make sure that no one who's worked hard and played by the rules and paid into the system grows old in poverty in America," Chris Christie said during a Fox News debate.

The poverty rate in the U.S. has increased 2.2 percentage points from 10 years ago, coming out to some 7 million more people.

"For the last 40 years, the American middle class has been disappearing, and more Americans are living in poverty than at almost any point in our nation's history," Sanders said in a campaign video.

Outside of the debates, the issue has been a part of Bernie Sanders' broader campaign against inequality. (Video via Bernie Sanders for President)

"The permanence of poverty, the intergenerational nature of it is a great challenge for our country, and we can't ignore it," Jeb Bush told a reporter from News & Observer.

But explicitly, more of the Republican candidates have been talking about poverty than the Democrats.

"I think we have failed to take the next step, which is to help people trapped with inequality of opportunity to have the opportunities to build for themselves a better life," Marco Rubio told "Face the Nation."

"Our economy is growing and creating jobs at the fastest pace since 1999," President Obama said in his State of the Union address.

It's an opening to attack President Obama's narrative of an ongoing economic recovery.

But Republican policies, which often involve cutting welfare benefits, are a hard sell to the country's poor. (Video via WEWS)

Still, there's a political reason candidates of both stripes don't spend as much time on the poor, as Erik Spanberg laid out in the Christian Science Monitor: "Though the percentage of people living under the poverty line is roughly equal to the percentage of Americans who are Hispanic, no one is courting the poor because their turnout on Election Day is traditionally low."