Why Posting 'The Interview' Online Isn't So Simple 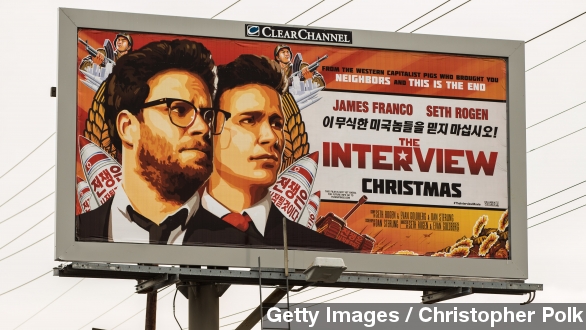 SMS
Why Posting 'The Interview' Online Isn't So Simple
By Jake Godin
By Jake Godin
December 20, 2014
Having cancelled the film's Christmas opening, Sony has options for releasing "The Interview." But none of those options are ideal.
SHOW TRANSCRIPT

But Sony CEO Michael Lynton said he wasn't giving up, hinting to CNN that Sony may still try and release the movie.

“We have not caved, we have not given in, we have persevered, and we haven to backed down. We have always had the desire to have the American public see this movie.”

But how exactly would Sony be able to get “The Interview” to the public without showing it in theaters? Well, Sony has a few options, but they’re not exactly bulletproof.

Option number one: Crackle. No, not like the cereal. We're talking about Sony’s online video streaming service. Think Hulu, but with much less content and not quite as popular.

The theory is that Sony could simply release “The Interview” on Crackle to both stand up to an international cyberbully and generate interest in its streaming site at the same time.

Sony would still generate cash since the site is ad-supported. Sony could also require payment from viewers.

But then there are the leaked emails revealing that Sony considered selling Crackle as recently as November, meaning it may not be in love with the service. There’s an alternative though — video on demand.

Thousands of movies are available through video on demand, bringing new releases to the viewer in the comfort of their own home.

But there’s another problem here as noted by Fast Company — for as big of a corporation as Sony is, it doesn’t have its own video on demand service aside from streaming on PlayStation, which doesn’t have a large enough audience.

OK, so how about the numerous other video on demand services offered by cable companies? Fast Company notes there’s yet another problem here as movie studios typically ask for 80 percent in royalties for the first two weeks of showing a movie.

If Sony were to lower that to offset any cyberattack retaliation worries for cable companies, there’d be the chance they’d never be able to raise the price again.

So both Crackle and video on demand have their problems. But Sony still needs to release “The Interview” in some form or another, at least in the opinion of Ken Paulson writing for USA Today.

"What value is free speech if we're afraid to use it? … This movie can't go unseen. At the heart of creativity is the courage to express yourself freely. Sony needs to summon up that courage right now.”

Sony has yet to announce any specific plan to get “The Interview” to the public. The cybergroup responsible for the attack has threatened to release more data if Sony does indeed release it.