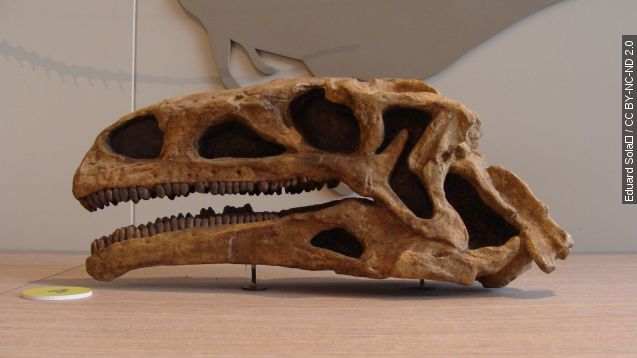 SMS
Why Plant-Eating Dinos Might Have Avoided The Equator
By Jamal Andress
By Jamal Andress
June 16, 2015
We've known that herbivorous dinosaurs avoided tropical areas during the Triassic Period, but no one knew why. A new study has an answer.
SHOW TRANSCRIPT

It has long been known that large herbivorous dinosaurs did not populate tropical areas during the late Triassic Period, which was about 230 to 200 million years ago. But, oddly enough, no one knew why.

Well, according to a new study, it was the unstable climate that kept those herbivores from migrating to tropical areas.

As one of the researchers from the study put it, "Large, warm-blooded dinosaurian herbivores weren't able to exist close to the equator — there was not enough dependable plant food."

Simply put: no plants, no plant-eating dinosaurs. Scientists say carbon dioxide levels then were four to six times what they are now, which made those regions more arid and unfriendly to plants. The study also suggests wildfires persisted during this period with varying intensity, which killed off more plants. (Video via BBC)

In order to conduct the study researchers analyzed fossils, charcoal left by ancient wildfires and stable isotopes from organic matter and carbonate nodules that formed in ancient soils.

The study's lead researcher, Jessica Whiteside, said, "Each dataset complements the others, and they all point towards similar [climate] conditions."

Whiteside also points out that if the human race doesn't change as it relates to carbon emissions, we could experience similar conditions in the not-so-distant future. (Video via Ben Seese / CC BY NC ND 2.0)

This study was published in the "Proceedings of the National Academy of Science."