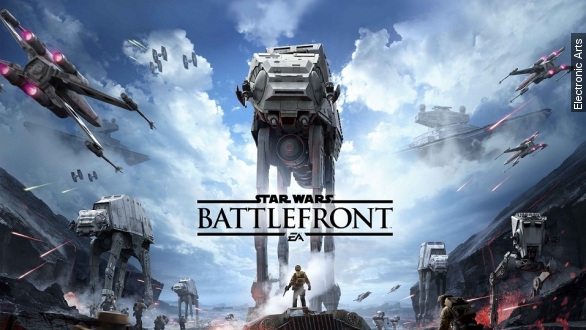 Disney is releasing "Star Wars: Battlefront" as the first video game from that galaxy far, far away since it closed Lucasfilm's LucasArts development studio in 2013.

EA and developer Dice wasted little time. "Battlefront" got its first teaser at the Electronic Entertainment Expo in 2013.

And a glitzy reveal trailer during the Star Wars Celebration convention in 2015.

It looks — and sounds — amazing, but certain corners of the Internet are less than happy with all the bits EA and Dice are shaving off the franchise. Campaign game mode is out, the space battles and Clone Wars settings that helped define the first "Battlefront" games are gone, and the AT-ATs are on rails.

"This deal is getting worse all the time," Lando Calrissian said in the original "Star Wars" trilogy.

No kidding, Lando. Not that fans are necessarily owed anything. Hell might hath little fury like nostalgic gamers scorned, but Disney can just cover its ears with the incredible amounts of money it's already making. "Star Wars: Episode VII - The Force Awakens" hasn’t even hit theaters, and Disney's already made back half of the $4 billion it paid for the "Star Wars" franchise in stock value alone.

As one analyst explained to Fortune, the familiar name should be enough to guarantee success:

"It's Star Wars, and the brand has a much broader level of recognition than the other games, period. Grandma will buy Star Wars … because she doesn't know what Halo is."

"Battlefront" is set for release on PS4, Xbox One and PC Nov. 17, one month before "The Force Awakens" debuts in theaters.

This video includes music from Broke for Free / CC BY 3.0.