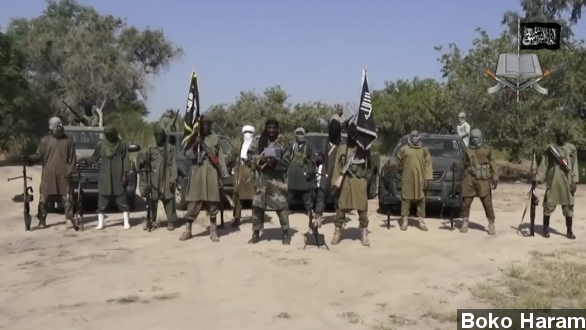 While the world was focused on the massacre in Paris, another far more deadly tragedy was playing out in Nigeria. (Video via Paris Tribune)

So many people were killed last week, authorities have reportedly given up counting the bodies. (Video via Euronews)

Some reports say as many as 2,000 are dead — mostly women and children who couldn't get away fast enough.

Boko Haram is responsible for the carnage. This is the same terrorist group that for six years has waged an insurgency inside northeastern Nigeria and last year kidnapped more than 200 schoolgirls.

In recent months, the insurgents have stepped up their campaign of kidnapping and murdering, attacking more than a dozen villages this month. On Jan. 3, in what Amnesty International called the group's "deadliest act," Boko Haram launched an assault on the town of Baga.

Boko Haram now controls a territory about the size of Costa Rica and is responsible for an estimated 10,000 deaths this year alone. So why is it that Nigeria — Africa's biggest economy — seems powerless to stop them?

A look at Nigeria's recent history of coups helps explain, in part. Because the country is so coup-prone, its leaders have kept the military weak to hold on to power. (Video via YouTube / abiez)

"Terrorists will not get away with their atrocities," he said during his New Year's address. (Video via Channels TV)

Under his government, the military's stayed underfunded, underarmed and undertrained — no match for the increasingly well-equipped militants who know the terrain better. (Video via ENCA)

In May 2013, Jonathan declared a state of emergency, sending in more troops with expanded powers.

But the counteroffensive has had little impact on curbing the insurgency. Making things worse, the soldiers involved have been accused of their own atrocities.

When insurgents attacked troops in Baga in April 2013, residents say the military responded by burning down the entire village, killing 200 civilians. (Video via Alqarra TV)

These heavy-handed tactics can benefit Boko Haram, which is able to recruit young men who fear the military.

The military's commander in chief recently announced his re-election bid. While he was quick to condemn the Paris shootings, it took President Goodluck Jonathan nearly a week to comment on Boko Haram's latest attacks.