Why NASA's Proposed Mission To Europa Is A Big Deal 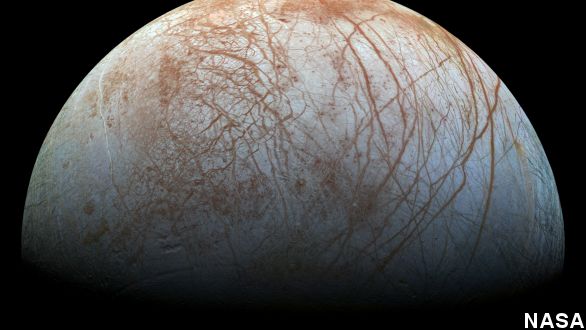 SMS
Why NASA's Proposed Mission To Europa Is A Big Deal
By Steven Sparkman
By Steven Sparkman
February 4, 2015
A mission proposed this week would send a probe to Jupiter's moon Europa, one of the best candidates for alien life in our solar system.
SHOW TRANSCRIPT

A proposed NASA mission announced this week is pretty much destined to capture the public's attention if Congress approves its funding: a mission to Jupiter that will see if one of the planet's moons could support life.

NASA Administrator Charles Bolden said Monday in his "State of NASA" address, "We're planning a mission to Jupiter's fascinating moon Europa, selecting instruments this spring and moving toward the next phase of our work."

Europa is becoming one of the most talked-about objects in our solar system and for a very simple reason: It's one of two places, aside from our planet, known to have liquid oceans.

A promotional video from NASA says, "It's an ocean that is global and may contain two to three times the volume of all the liquid water on Earth."

Along with Saturn's moon Enceladus, Europa is thought to have an icy shell housing a huge ocean and a rocky core, kept warm by the gravitational pull of the massive home planets. That means life could be possible, even though both moons are far away from the sun.

The prospects for life there are so tantalizing, the moon is even working its way into pop culture.

Astrophysicist Neil deGrasse Tyson said of the moon in a 2007 lecture: "I want to go to Europa and go ice fishing. Cut through the ice, lower a submersible, look around and see what's there, see what swims up to the camera lens and licks it."

NASA's planned mission doesn't go quite that far. Dubbed Europa Clipper, the mission would send a probe to take close fly-by images of the moon and study its oceans using radar and other instruments.

It's not the up-close-and-personal mission space fans might have hoped for, but it's a first step that would give scientists a closer look at an alien ocean than they've ever seen before.

And NASA won't be alone. The European Space Agency is planning to send its own probe to Europa. If fully funded, both missions would launch in the 2020s.