Why MMA's Biggest Names Are Speaking Out Over Diaz's Ban 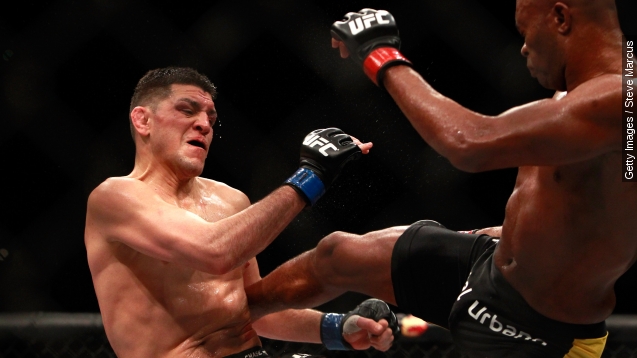 SMS
Why MMA's Biggest Names Are Speaking Out Over Diaz's Ban
By Carter Woodiel
By Carter Woodiel
September 22, 2015
UFC fighter Nick Diaz was suspended for five years over a marijuana offense, and others in his sport, including Ronda Rousey, are not happy.
SHOW TRANSCRIPT

UFC fighter Nick Diaz is facing a five-year suspension for marijuana use, and a growing number of voices have loudly protested the result, including the biggest name in his sport.

Diaz was suspended and fined $165,000 by the Nevada State Athletic Commission on Sept. 14 for testing positive for marijuana after a January fight with Anderson Silva. The suspension marks the third time Diaz has been disciplined for pot usage since 2007. (Video via MMA Weekly)

As you might expect, Diaz was unhappy with the commission’s decision, and said as much to reporters just after it was handed down.

“They’ve done everything they can to keep me from being all the way on top, where I should be,” Diaz said to reporters. “I want to tell each and every one of them that they’re a bunch of dorks.”

Diaz’s fellow fighters were quick to back him up. His training partner and friend Ronda Rousey, arguably the most famous MMA fighter on the planet, lashed out at the commission two days after the decision.

"It’s so unfair if one person tests for steroids that could actually really hurt a person and the other person smokes a plant that makes him happy and he gets suspended for five years,” Rousey said at a press conference Sept. 16.

Rousey was referencing Anderson Silva, who received a one-year ban, also by the NSAC, for performance-enhancing drugs following his fight with Diaz.

That comparison isn’t entirely fair, though, since Diaz’s status as a repeat offender played a large role in the severity of his punishment. But that’s not the only reason people are speaking out.

For example, the test that got Diaz suspended wasn’t the only test he took leading up to the fight. He was tested before and after the bout by a different agency, and both tests came up negative.

Boxing champion Floyd Mayweather, who recently retired with a career record of 49-0, also came to Diaz's defense, making his stance clear on the suspension. (Video via Box Nation)

But commentators on the other side of the argument, like Stephen A. Smith of ESPN, say Diaz’s positive test shows he deliberately broke the rules, something he has no excuse for.

“Here’s the reality: It’s not allowed. You knew this. And you did it anyway,” Smith said regarding Diaz.

It’s hard to believe the NSAC will relent based solely on fighting words, but legal action could be a way to reduce Diaz’s suspension. The fighter’s legal team says they plan to take up the case in a higher court.