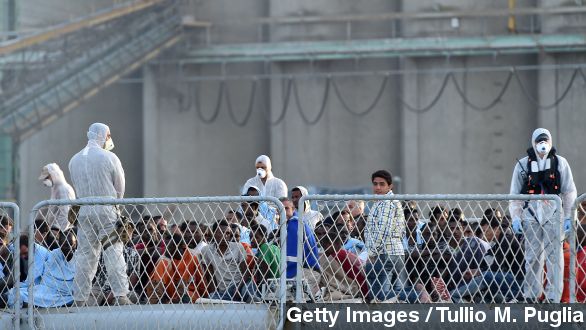 They’ve been dubbed ghost ships — vessels crammed with migrants and set on autopilot by smugglers who abandon their human cargo at the last minute to avoid arrest. (Video via Euronews)

That happened twice this week. Italy-bound ships packed with hundreds of refugees were set on a collision course for the coast with no one steering — prompting the Italian coast guard to intervene and rescue the passengers. (Video via Deutsche Welle)

The European Union calls it a “new degree of cruelty” that’s only getting global attention now after months of similar incidents.

Before now, human traffickers had mostly put migrants crossing from North Africa to Europe in smaller vessels, often fishing boats. But the two ships intercepted this week were much bigger. (Video via Guardia Costiera)

Smugglers might be turning to these big ships because Italy officially ended its search and rescue program just a few months ago. (Video via Marina Militare)

That program was credited with rescuing tens of thousands of migrants traveling on smaller, unsafe vessels.

The smugglers can charge people a lot more to get on these bigger, safer ships. Those on board one of the ships found this week were reportedly charged $6,000 each. Multiply that by nearly 1,000 migrants, and the smugglers raked in somewhere around $6 million.

It’s not only a costly trip for these migrants but a dangerous one. In just the past year, over 3,000 died trying to reach Europe.