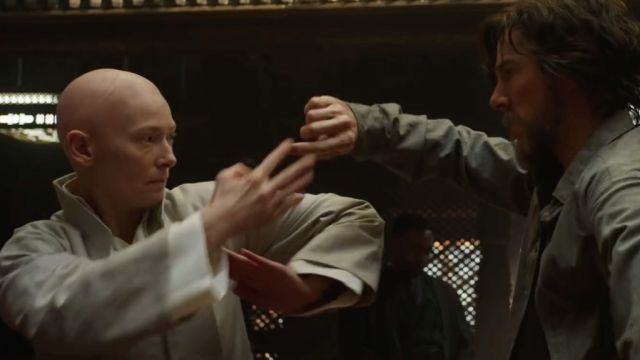 Comic book fans have been buzzing about Marvel's next blockbuster since the teaser debuted in mid April.

But this question keeps popping up: Why is the Ancient One, who's usually portrayed in comics as an elderly Asian man, being played by European woman Tilda Swinton?

"The social justice warriors were gonna get mad at us for something this week. ... There was no way to avoid it," writer C. Robert Cargill said.

"There is no other character in Marvel history that is such a cultural land mine that is absolutely un-winnable," Cargill said.

Cargill claims no matter whom Marvel cast, someone would have been offended.

He explained the original character, who's from Tibet, was based on a "racist stereotype." So by staying true to the comics, Marvel says it risked alienating pretty much all of China, one of the biggest film-watching countries in the world.

In a statement to Mashable, Marvel said: "The Ancient One is a title that is not exclusively held by any one character, but rather a moniker passed down through time, and in this particular film the embodiment is Celtic."

In past Marvel films, Michael B. Jordan, Michael Clarke Duncan and Samuel L. Jackson have played characters who were noticeably different from their comic book counterparts.

Cargill says filmmakers wanted to turn the challenging casting call into an opportunity to embrace feminism. Their thinking: "Let's make one of the most powerful characters in the Marvel universe a woman."