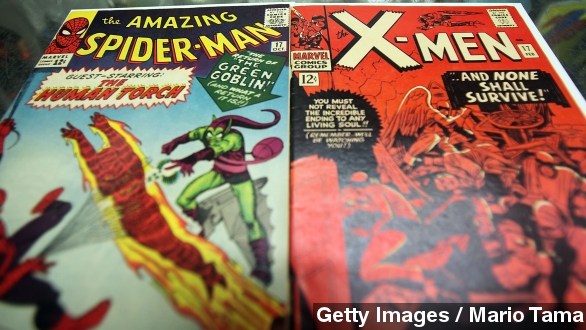 SMS
Why Marvel Might Not Sign Off On Fox's X-Men TV Series
By Ben Lawson
By Ben Lawson
January 26, 2015
Fox executives are hoping to make a live-action X-Men television series, but will Marvel give them the go-ahead?
SHOW TRANSCRIPT

Because we all know we need more superheroes, Fox is reportedly planning to create an X-Men television program.

TV Insider spoke with a Fox exec who confirmed the network is looking to make a TV show about some yet-to-be-named characters from the X-Men franchise. But there's one big roadblock here: Marvel.

20th Century Fox owns the movie rights to the X-Men franchise, but Marvel still owns the comic books. Any TV deal would require approval from Marvel and, by extension, parent company Disney.

Fox Entertainment Chairman Gary Newman tells TV Insider: "It's in negotiations. We're cautiously optimistic; we had a good meeting with them. That will not be on a fast track creatively. This is just the deal; now we have to find the creative."

But convincing Marvel to sign off on the deal might be a bit more challenging than it seems.

When Marvel signed away the movie rights to some of its top franchises like X-Men and Spider-Man, superheroes weren't considered a guaranteed success — not the way they are now.

Now, Marvel and its properties have proved to be box office juggernauts, and the company that created the X-Men is missing out on box office numbers like the $750 million "Days of Future Past" made last year.

We already know Marvel tried to get the "Spider-Man" rights back from Sony, and it probably wants Wolverine and the gang to return home as well.

So it might be unwilling to let Fox go even further with the franchise, especially because that would mean Marvel would compete against its own characters on both the big screen and on TV.

Marvel now has two TV shows, "Agents of S.H.I.E.L.D." and "Agent Carter," on ABC, another Disney company. Then, tack on four more shows and a miniseries in development for Netflix.

Lest we forget, Fox is the home of "Gotham," a show from DC Comics, Marvel's longtime competitor.

But if Fox execs are talking to the press about it, Fox must be pretty confident it's going to happen.