Why Leonard Fournette Won't Go Straight To The NFL ... Yet 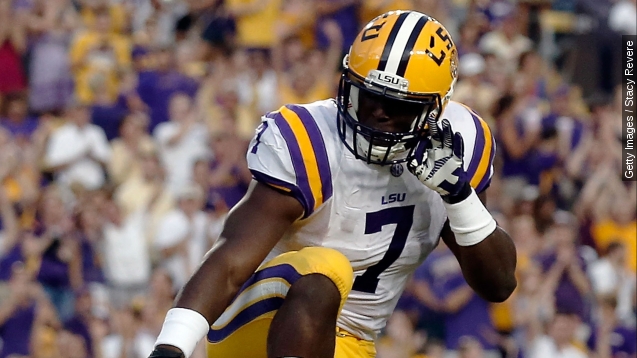 If you know college football, you know Leonard Fournette.

"It's pretty clear right now, just going back and studying most of the top teams in September, that he's the best player in college football," Todd McShay said.

"This kid is a freak and he's only going to get stronger," Kirk Herbstreit said.

LSU's sophomore running back is the top candidate for the Heisman Trophy, with more than 600 yards and eight touchdowns in his first three games. That's good. (Video via ESPN)

So good, in fact, some people think he should go straight to the NFL. The only problem — the NFL won't draft players until they've been out of high school for three years. (Video via Sports Illustrated)

Some have suggested Fournette should sit out his junior season to avoid injury and ensure a high draft pick, while others think he should challenge the NFL's rule and try and enter the draft early. But those might not be such good ideas.

There was similar talk about South Carolina's All-American defensive end Jadeveon Clowney. He played his junior year and was drafted first overall by the Houston Texans.

He couldn't avoid injury for long, though. Once he got to the pros, he played less than half a game in his first season after undergoing knee surgery.

As for the legal route, Fournette wouldn't be the first high profile running back to try to get to the pros early.

Ohio State's Maurice Clarett attempt to sue his way into the league in 2004 but lost his case. After showing up to the 2005 combine slower and overweight, he fell to the third round of the draft and fizzled out of the league.

But LSU head coach Les Miles isn't worried about the speculation about Fournette and said he's confident his workhorse running back will return for his junior year. (Video via Sports Illustrated)

"To me, there's a lot of people out there stirring the pot... I can't imagine that Leonard would be sitting anywhere inactive for a fall," Miles said.

And don't worry Tiger fans. Fournette himself tweeted, "I will never jump ship... I'm drowning with my brothers."

Correction: An earlier version of this video misstated the NFL's draft policy. The video has been updated.