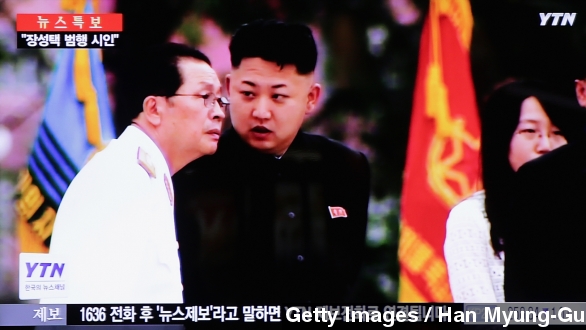 If Kim Jong-un turns up in Moscow in May for his first-ever venture abroad as supreme leader, don't be shocked.

The Kremlin told South Korea's Yonhap News Agency, the leader of North Korea would visit for the May 9 march celebrating Russia's victory over Germany in World War II. (Video via Korean Central News Agency and RT)

As the Korean Ministry of Unification told Yonhap, that leaves some ambiguity, considering North Korea's No. 2 Kim Yong-nam has been in charge of foreign relations abroad in the past. (Video via Korean Central News Agency)

Relations between the two countries have been close of late, and Russia has looked to boost relations, with Russian foreign minister Sergei Lavrov welcoming a delegation of North Korean officials in November. (Video via 5 Канал)

But it doesn't seem like it would look too good for Russia, given the crisis in Ukraine and its alleged role in it, to be hosting one of the world's most reviled dictators. So what gives?

Russia has already been labeled a rogue state by a number of critics, so to understand why it would want to host the leader of the world's roguest state, you have to look at how Russia sees it.

Columnist Alexander Golts argues it's kind of a gaze too long into the abyss — the abyss gazes back situation. (Video via Fritt Ord Organization)

Golts says Russia has a history of engaging with rogue states like Iran and North Korea because it has seen itself as the best representative of so-called civilized countries. (Video via Press TV)

And these labels haven't formed in a vacuum. U.S. and EU sanctions have served to further isolate Russia and, compounded by low oil prices, have wreaked havoc on the country's economy. (Video via CCTV)

That's led the country to look for alternatives to Western powers as PBS reports, looking to China for international financing in the face of a decline of more than $100 billion in international reserves last year.

If President Obama's appearance at India's Republic Day Parade showed us anything, it's that inviting a world leader to your biggest parade sends a message. (Video via CNN)

So if Russia's looking for leverage and to defy the U.S. and others who have imposed sanctions, one of the Western world's biggest enemies might be just the right person to send that message.