Why Japan, South Korea And China Are Finally Talking Again 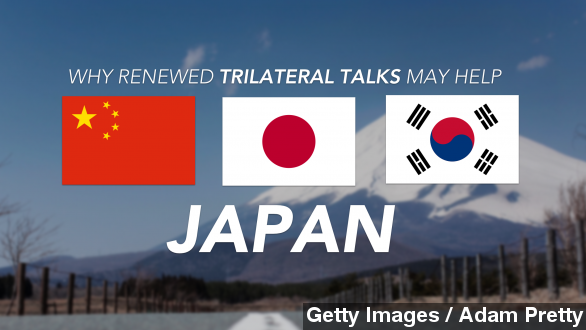 After a three-year break, top level diplomats from South Korea, China and Japan met in the same room in Seoul on Saturday to jumpstart diplomatic relations between the three nations. (Video via CCTV)

But Japan may have the most riding on what comes of the talks. That's because the island nation has found itself in a bit of an awkward diplomatic bind with both South Korea and China over two things — territory and its wartime past.

Japan and South Korea disagree on who owns this pair of volcanic islands in the Sea of Japan. South Korea currently administers the islands, but Japan says it has its own claim on them.

China and Japan both disagree who owns the Senkaku or Diaoyu Islands, off the coast of Taiwan in the East China Sea. Both China and Taiwan have claims on the islands, but Japan currently administers them after having annexed them in 1895.

Both China and South Korea have a long history with Japan, which invaded both countries during World War II. Japanese Prime Minister Shinzo Abe has made recent moves toward revising Japan’s history and backtracking on apologies made by his predecessors. (Video via U.S. National Archives)

One specific case is the use of so-called “Comfort Women” by the Japanese Imperial Army. Korean activists argue Japanese military brothels used Asian women as sex slaves while some Japanese claim they were prostitutes instead. (video via

Japan has made some attempts to ease tensions, though.

That follows meetings between Prime Minister Abe and Chinese President Xi Jinping earlier in November 2014 — their first meeting in more than two years.

Japan and South Korea still suffer from somewhat frosty relations, but in a bilateral meeting between the two countries’ foreign ministers on Saturday, separate from the trilateral talks, both agreed to take steps to resolve the WW2 “comfort women” issue. (Video via Press TV)

This video includes images from Getty Images, an image from Bryan Dorrough / CC BY 2.0 and music from fynnymisery / CC BY 3.0.