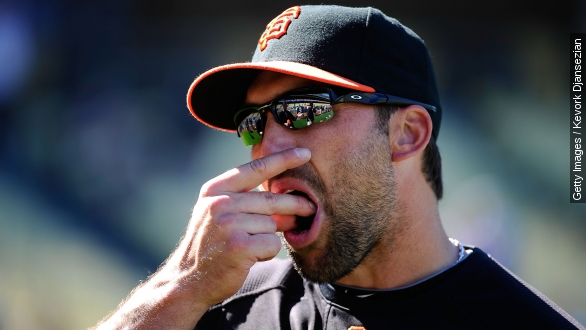 SMS
Why It Took So Long For A City To Ban Tobacco In Baseball
By Cliff Judy
By Cliff Judy
May 9, 2015
San Francisco banned smokeless tobacco from all sports venues Friday. For a sport as fiercely protective of its traditions as baseball, will it work?
SHOW TRANSCRIPT

Perhaps no American sport is more tied to its traditions than baseball, no matter the logic behind those traditions or — frankly — the ick factor.

On Friday, the city of San Francisco banned smokeless tobacco in all sports venues, including professional parks.

That includes AT&T Park where the reigning world champion San Francisco Giants play. So Silicon Valley moms and dads, you won't have to worry about your kids spotting their favorite player dipping starting next season. (Video via YouTube / socalbaseballtv)

But why it took so long for any municipality to step in and ban "chaw" is more an issue of a game that fiercely protects tradition.

We're decades removed from when baseball had the ability to let umpires check video and make sure they got calls right, but we only just started replay reviews last season and many still call that move an insult to America's pasttime.

New MLB Commissioner Rob Manfred has made speeding up an, at times, lethargic game one of his top priorities. (Video via Fox Sports)

But chewing tobacco undeniably goes beyond getting the call right or keeping the pace of the game fast enough to hold fans' interest. The Campaign for Tobacco-Free Kids says more than half a million kids age 12-17 try smokeless tobacco for the first time each year.

Those lumps in players' cheeks are so intrinsic to baseball, they famously led to the make-believe boys in "The Sandlot" getting sick on a carnival ride. Critics say it's hard to argue the product isn't marketed to real-life kids and baseball's inspired generations of tobacco addicts. (Video via 20th Century Fox / "The Sandlot" & ABC)

"I honestly don't get any buzz or effect off of it anymore," college baseball player Ray McCourt told ABC. "It's just kind of a baseball thing."

"It gave me the ideal of, 'Oh, if I want to hit bombs, I need to be dipping,'" said McCourt's teammate.

The latest round of critics calling for an end to chewing tobacco in Major League Baseball came last year when Hall of Famer Tony Gwynn died at just 54 years old of cancer in his salivary gland. (Video via CNN)

Gwynn and his son — also a major league ballplayer — blamed his years of dipping.

"Tobacco in my mind is what killed my dad," Tony Gwynn, Jr. told HBO.

Of the new ban in San Francisco, Giants manager Bruce Bochy told the team's beat reporter, "It's a step in the right direction. I think it can be a good thing. It's going to be hard to enforce. It's a tough habit to break."

To Bochy's point, enforcement does seem sketchy. If players decide to step back into the clubhouse between innings to dip, would anyone really stop them?

The MLB players union, the most powerful union in American professional sports, could oppose the ban if it feels players' rights are being violated. According to the current labor agreement, players and managers can't chew during interviews and can't carry tobacco when fans are in the stadium. The union had no comment on San Francisco's tobacco ban.