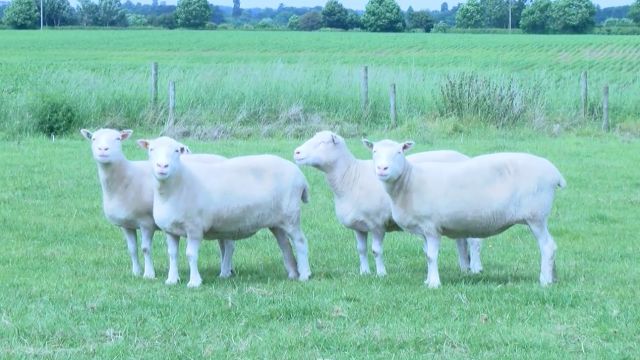 SMS
Why It Matters That Dolly The Sheep's Cloned 'Sisters' Are Healthier
By Grant Suneson
By Grant Suneson
July 26, 2016
Daisy, Debbie, Denise and Dianna are alive and well at 9 years old.
SHOW TRANSCRIPT

In 1996, Dolly the sheep became the world's first mammal cloned from an adult cell.

Scientists fused the DNA from one sheep with an egg from another to create an embryo that eventually became Dolly.

Sadly, Dolly didn't live to see her seventh birthday because of a lung disease. She also seemed to age much quicker than an average ewe, suffering from early onset osteoarthritis and joint problems.

That raised concerns that cloned animals might not be as healthy as naturally born animals. However, Dolly's "sisters," Daisy, Debbie, Denise and Dianna, were cloned from the same group of cells years later and are faring much better.

They just turned 9, which is about 70 in human years. The sheep have made it more than two years longer than Dolly and don't seem to have any of the same health problems as their predecessor.

It's tough to say why the sisters are healthier than Dolly, but scientists suspect that advances in embryo development methods account for the differences.

The continued wellness of Daisy, Debbie, Denise and Dianna is a crucial milestone, not only for the scientific advancement of cloning technology, but to prove that cloning can be ethical.

The sisters are set to be put down next year at the ripe old age of 10 so their bodies can be studied further, but their contributions to the field of cloning will live on.

This video includes clips from University of Nottingham and images from Getty Images. Music provided courtesy of APM Music.