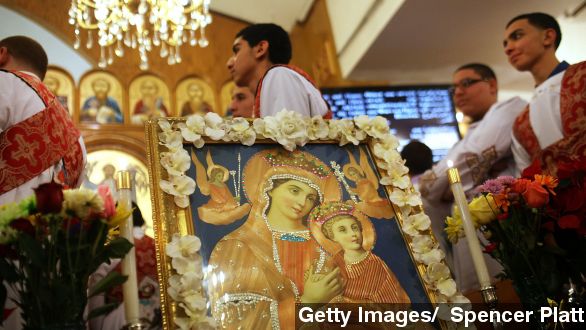 ISIS militants have released another execution video, this time showing the beheading of 21 Egyptian men held captive in Libya.

The men were all Coptic Christians. This month’s edition of ISIS's English-language magazine called their kidnapping revenge for Kamilia Shehata and Wafa Constantine.

Those women were both wives of Coptic priests who disappeared and reportedly converted to Islam. Eventually, Egyptian police discovered them and returned them to the custody of the church.

The story outraged many Muslims who accused the church of forcing the women to convert back to Christianity, and also many Christians who said they were forced to convert to Islam in the first place. (Video via Al Jazeera)

The divisions are emblematic of those that have existed throughout the Copts' nearly 2,000-year history in Egypt.

Today, Copts account for about 10 percent of Egypt's population, where Muslims are the majority. (Video via Voice of America)

They’ve long complained of persecution in Egypt, having seen their churches ransacked and burned to the ground. (Video via Human Rights Watch)

Muslim Brotherhood members are responsible for many of the attacks and blame the Copts for the toppling of Islamist President Mohamed Morsi. Some Copts have fled to Europe and the U.S. (Video via Video 7)

Others have gone to neighboring Libya, despite a full-fledged civil war and warnings from Egypt’s foreign ministry against travel there, partly because of the rise of jihadist groups. (Video via Sky News)

That includes ISIS. Although it mostly controls territory in Iraq and Syria, it's now reportedly gaining a foothold in Libya. Its magazine says this allows ISIS to “easily capture Coptic crusaders.”