Why ISIS Has Endured Fewer Airstrikes Than Saddam Hussein 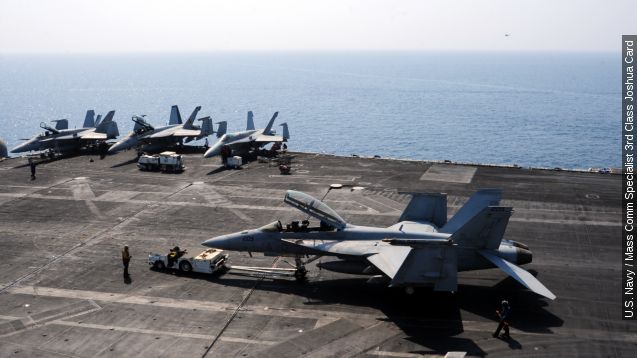 SMS
Why ISIS Has Endured Fewer Airstrikes Than Saddam Hussein
By Jake Godin
By Jake Godin
July 7, 2015
Why have there been fewer airstrikes in the war against ISIS than in other U.S.-led air campaigns?
SHOW TRANSCRIPT

"Our coalition's now hit ISIL with more than 5,000 airstrikes. We've taken out thousands of fighting positions, tanks, vehicles, bomb factories and training camps. We've eliminated thousands of fighters, including senior ISIL commanders," President Obama said during an update on the campaign against ISIS.

How do U.S.-led airstrikes against ISIS stack up against air campaigns in the past? (Video via U.S. Navy)

Compared to previous campaigns, there are far fewer airstrikes per flight mission. (Video via U.S. Navy)

Some have criticized that fact.

“Of the 12,000 sorties, 3,000 of them actually drop weapons. Don't we put our pilots in great danger if they're not going to drop weapons? Or are you going to have three out of four fighter sorties fly around in circles, and then return?” Sen. John McCain said during a Senate Armed Services Committee hearing.

So why are there fewer airstrikes?

One key difference from the past: ISIS is an insurgency, not an army. This means ISIS hides potential targets among civilian populations and does not field its forces like a conventional military.

Still, the U.S. claims airstrikes have killed an estimated 12,500 ISIS fighters. It also claims it hasn’t killed any civilians.

The Syrian Observatory for Human Rights says, so far, 162 civilians have been killed in Syria alone.

This video includes images from the U.S. Air Force, U.S. Navy and Getty Images and music from Kevin MacLeod / CC BY 3.0.