Why Is This Guy Always Yelling At Royal Births? 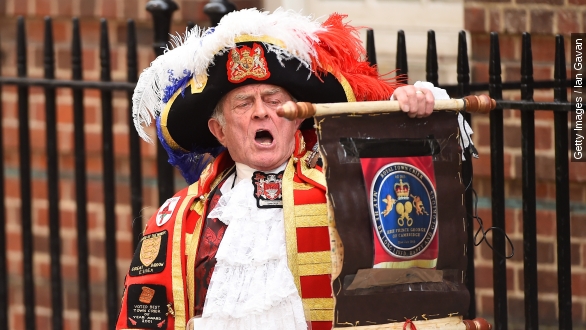 SMS
Why Is This Guy Always Yelling At Royal Births?
By Ben Lawson
By Ben Lawson
May 2, 2015
London's unofficial crier returned for the birth of Prince William and Kate's second child.
SHOW TRANSCRIPT

There is a lot to be said for tradition in royal affairs.

There is also a lot to be said for an old man in a funny hat stealing the spotlight from a newborn baby.

That was Tony Appleton giving his kind of unofficial announcement as a town crier — and, by the way, he is a town crier, just not for London, that city hasn't had one since 2009. Appleton did the same thing when Prince George was born back in 2013.

The position of town crier in England came about in medieval times when many people weren't able to read or write. So the crier would be called open to read new laws and other news.

But the funny thing is no one asked Appleton to do that for George's birth. He just showed up in full regalia and read a decree that sounded like it came straight from olden days. He actually made his announcement before the official one thanks to a tip he got from someone inside the hospital.

"I wasn't invited. I gate crashed... I always follow royals. I'm a real royalist... I decided I wanted to the be the first person in the world to announce the birth of that boy," Appleton said on KJR.

And at that time, the media didn't know what to think of him.

"Victoria, do you have any idea what we are looking at?" one CNN anchor said.

"London's town crier was everything you wanted him to be except intelligible. The only way he could have been better is if he were real," Stephen Colbert said.

Many started referring to him as the official town crier for London and his image became the face of George's birth announcement, which forced the media to do some back tracking when everyone figured out he wasn't legit.

But Appleton didn't like being referred to as a phony so when Kate became pregnant with her second child, he told Us Weekly he reached out to the royal family for their approval.

"This time I felt I was actually a messenger from the palace," Appleton said.

He got a thumbs up from the Duke and Duchess of Cambridge but Kensington Palace still made a birth announcement on Twitter before he had a chance to give his old-timey decree.