Why Is The US Crushing 1 Ton Of Ivory In Times Square? 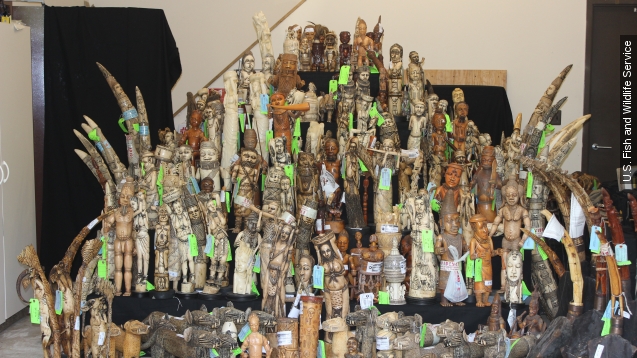 SMS
Why Is The US Crushing 1 Ton Of Ivory In Times Square?
By Jake Godin
By Jake Godin
June 19, 2015
The U.S. Fish and Wildlife Service will crush one ton of ivory in Times Square to send a message to illegal wildlife poachers and traffickers.
SHOW TRANSCRIPT

Importing ivory in the United States is almost completely banned. And to highlight just how serious it is about the ban, the U.S. Fish and Wildlife Service is crushing one ton of ivory in New York City's Times Square on Friday. (Video via roger smith / CC BY NC 2.0)

The idea is to spread awareness about the illegality and consequences of wildlife trafficking. It's also meant to send a message to any traffickers that the U.S. doesn't welcome the illegal trade. (Video via U.S. Fish and Wildlife Services)

This isn't the first ivory crush either — the first was done in Denver, Colorado in 2013 when six tons of elephant ivory was destroyed.

The bulk of ivory in Friday's crush will be what the U.S. government seized from Victor Gordon, a Philadelphia man who in 2009 was found to have smuggled more than 400 pieces of carved elephant ivory valued at almost $800,000.

The World Wildlife Fund says as many as 30,000 elephants are killed each year for their ivory. In the past, much of that illegal ivory came to the states with a 2008 study saying the U.S. only lagged behind China as one of the largest ivory markets.

Since then, the U.S. government has implemented stricter laws that almost entirely ban imported ivory. Only non-commercial sport-hunted trophies are allowed, and even those may soon be limited.

And yet, in 2014 police told The Washington Post that for every crate containing trafficked goods discovered in New York's JFK Airport, about 10 get by. They just don't have the resources to catch everything.

Speaking to The Wall Street Journal, the executive vice president of the Wildlife Conservation Society says the fact that older ivory from before an international ivory ban was implemented is still legal complicates the fight against illegal trafficking.

"Elephants that were killed prior to 1989, fundamentally are okay. But the animals that were killed after 1989, you cannot use their ivory. Now here's the situation, you can't really tell the difference. It's really hard."

But, there may soon be more ways to combat illegal trafficking — a new study released this month suggests DNA from trafficked ivory may be useful in tracking where poachers kill elephants.

This video includes images from the U.S. Fish and Wildlife Service.