Why Is The Amazon Absorbing Less Carbon? 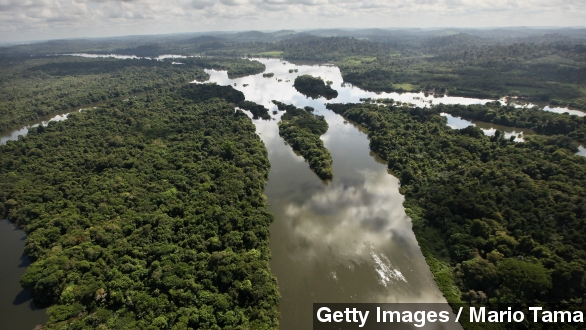 SMS
Why Is The Amazon Absorbing Less Carbon?
By Kate Grumke
By Kate Grumke
March 18, 2015
A study found the Amazon is now consuming half as much carbon dioxide as it was in 1990 partially because of shorter tree life spans.
SHOW TRANSCRIPT

The Amazon rainforest is the largest rainforest in the world. It makes up more than half of all rainforest on the planet and has been called the Earth's lungs — filtering out carbon dioxide from the atmosphere.

But a new study found the Amazon isn't eating up anywhere near as much CO2 as it used to. (Video via CCTV)

The study, published in Nature on Wednesday, found that in 1990 the Amazon was absorbing two billion tons of carbon dioxide every year. Now it eats up about half of that.

And now for the first time, fossil fuel emissions in South America are higher than what the trees can consume.

So what's behind the slowdown in our planet's filter?

According to the researchers, the rainforest is absorbing less emissions because the trees are dying younger than they used to.

The lead author of the study said, "Tree mortality rates have increased by more than a third since the mid-1980s, and this is affecting the Amazon’s capacity to store carbon."

But when it comes to why the trees are dying earlier, the researchers aren't so straightforward.

Part of the reason could be that at first, the increase in carbon dioxide from humans made the trees grow faster, which ultimately sped up their entire life cycle. Live fast, die young, right?

The researchers also suggest droughts and recent high temperatures could be playing a role in the shorter tree life spans.

A report from NASA last year found that an area twice the size of California had been suffering from a "megadrought" since 2005.

And the new study didn't look at areas of the Amazon that had been hit by deforestation. In the past 40 years, 20% of the Amazon has been cut down, according to National Geographic.

But still, the main takeaway from this new study is that we can't count on the Amazon to clean up our air as much as we thought we could.