Why Is North Korea Playing Nice? 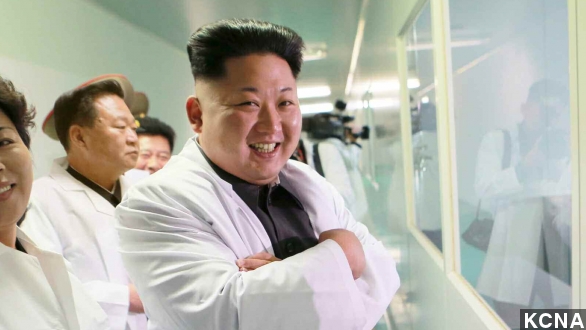 There was its sending of a high-level delegation to its adversary, South Korea.

There was the rare address its foreign minister made at the U.N. General Assembly. (Video via United Nations)

... and then, the release of all of its American prisoners. (Video via WCPO)

Lately, North Korea has been on its best behavior. But why?

This is, after all, the same North Korea that not long ago threatened to decimate Seoul, Tokyo and Washington with nukes. (Video via Euronews)

Chances are the North's outreach has something to do with this U.N. resolution detailing North Korea's "crimes against humanity" along with a looming vote to refer a certain Kim Jong-un to the International Criminal Court. (Video via ODN)

Not to be outdone, North Korea responded with a report of its own, explaining its citizens live "a worthwhile and happy life without any social and political uncertainty."

Although its ally China, a Security Council member, would almost certainly veto the measure to bring its neighbor before the ICC, North Korea probably doesn't want it to come to that, which might explain its recent charm offensive.

Then again, maybe North Korea's trying to stick it to China. Consider the timing of the prisoner release. Just a day before the APEC summit kicked off in Beijing.

Foreign Policy suggests that was no coincidence — "a subtle diplomatic insult" designed to steal attention from Beijing.

Relations with China have been dicey ever since Kim executed his Beijing-friendly uncle last year.

And let’s not forget North Korea’s habit of engaging with the international community when it wants something in return.

While in Beijing, President Obama is meeting with his Chinese counterpart Xi Jinping. Among their talking points — North Korea’s nuclear program.

According to 38 North, releasing two American prisoners was "designed to deprive President Obama of a talking point when explaining his administration's reluctance to resume the Six Party Talks."

The Six Party Talks — aimed at ending Pyongyang’s nuclear program — broke down in 2009 after North Korea launched a ballistic missile. (Video via CCTV)

The U.S. says it won't rejoin the talks unless North Korea first takes steps to dismantle its nuclear facilities. North Korea has shown no signs of doing so but is calling for the U.S. to engage anyway. (Video via RT)

It doesn't sound like that's going to happen. President Obama recently dismissed the idea that the prisoner release could open the door to a new round of nuclear talks.