Why Is Italy Rescuing So Many Refugees In The Mediterranean? 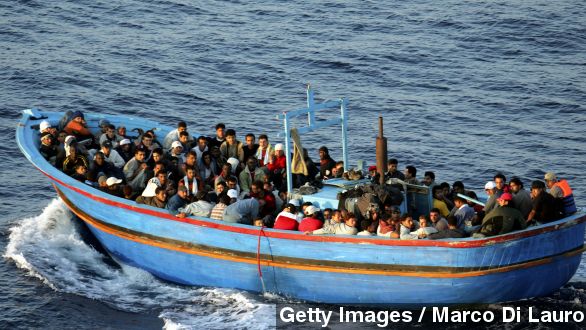 For the second time in two days, the Italian coast guard has boarded an abandoned ship in the Mediterranean filled with refugees from ailing nations.

The most recent rescue operation took place Friday on the Sierra Leone-registered Ezadeen cargo ship. This footage shows the officers lowering themselves onto the ship at night.

According to The Local's Italian branch, the nearly 50-year-old ship contained around 450 migrants and was only able to signal for help after one of them managed to operate the ship's radio to tell the coast guard the ship's crew jumped ship.

Barely 48 hours prior, the Italian coast guard had staged another rescue operation for an abandoned ship — the Blue Sky M. (Video via Guardia Costiera)

As with the Ezadeen, a helicopter lowered officers onto the ship to reverse its course. CNN reports the ship was on autopilot, and if it had been allowed to continue its trajectory, it would have run ashore, causing a "possible environmental catastrophe." (Video via Guardia Costiera)

According to CNN, the Blue Sky M had more than 750 migrants on board, meaning within the past couple days, Italy has dealt with more than 1,000 rescued refugees.

But that's a small number compared to the United Nations estimate that, in the first seven months of 2014 alone, 87,000 refugees reached Italy's shores. Most were from Syria in the Middle East and Eritrea in Africa.

As for why so many immigrants choose Italy as their destination, a writer for The Washington Post says the European nation has embraced "what activists and refugee agencies describe as one of the world's most progressive policies toward migrants."

That progressive policy supposedly started after Pope Francis visited a site where migrants had drowned trying to reach Italy and, according to the Post, provided the nation with "a new moral compass."

According to Frontex, Europe's border management agency, more than 11,000 migrants have been rescued from situations similar to the Blue Sky M and Evadeen since Nov. 1.

Not all of the refugees make it. According to a September report by the Switzerland-based International Organization for Migration, more than 3,000 migrants died while trying to cross the Mediterranean in 2014. That's four times the deaths just a year earlier. (Video via Marina Militare)

Trips are often treacherous due to the use of overcrowded and decrepit boats. Human traffickers also have a careless — or worse — attitude toward the people on board. It's believed that smugglers deliberately sank a boat earlier this year after a confrontation on board, resulting in the death of 500 migrants. (Video via Guardia Costiera)

But with these latest two incidents, abandoning ships once they've set sail seems to be the new tactic of choice favored by smugglers trying to avoid arrest by European authorities.