Why Is Everyone Going After Mitt Romney? 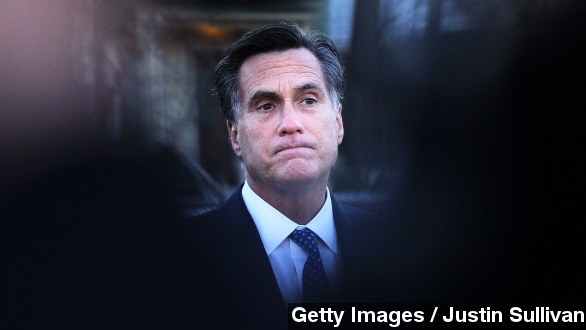 SMS
Why Is Everyone Going After Mitt Romney?

By Jasmine Bailey
January 16, 2015
As Mitt Romney considers a 2016 presidential bid, many of his critics, even some former supporters, are speaking out against him.
SHOW TRANSCRIPT

Apparently the third time is not a charm when it comes to former presidential candidate, Mitt Romney.

It's not news that Romney has been considering a bid for office in the 2016 elections, but if he's serious about moving forward, the former governor of Massachusetts will have to buck up and prepare for some harsh blows.

"I'm not happy, frankly, with the way he's chosen to re-enter presidential politics, and I think his friends need to be honest with him about that," Vin Weber said.

That was Vin Weber who served as Romney's advisor in the 2008 presidential election.

Weber's comments were light compared to many of Romney's other outspoken critics. Just take a look at these headlines — ouch.

So what's the deal? Why is Romney facing so much backlash? Well, we're hearing words like "recycled" and "out-of-touch." A lot of Republicans say they just want a fresh face; this would be Romney's third try, after all.

But still, as Chuck Todd with "Meet the Press" explained, it is pretty surprising to see just how quickly people are taking aim at Romney.

"I think this backlash against another Romney bid is probably coming a lot faster than even Romney expected, and I think it's because of the presence of Jeb," Todd said.

Todd was referring to Jeb Bush, who's already looking like the favorite for the Republican bid.

Even Rupert Murdoch has taken a shot, saying, Romney "had his chance, he mishandled it, you know? I thought Romney was a terrible candidate."

And with Romney's reemergence comes all the backlash he faced years ago. Remember this?: "You took your Irish Setter, Seamus, on a 12-hour trip tied to the roof of your car. ... what were you thinking?"

Or this: "They brought us binders full of women."

Okay, the list goes on, and as ABC notes, the slip-ups will very likely continue to haunt Mr. Romney.

But these are flubs both Romney and his camp have recognized in the past and with election season right around the corner, Politico reports Romney 3.0 will center on a different strategy:

Romney "wants to make tackling poverty ... one of the three pillars of his campaign. The former Massachusetts governor also says he’ll have a different communications staff and hopes to show voters a version of himself they didn’t get to see last time."

Cenk Uygur, host of "The Young Turks," said: "I love these politicians and how they talk about all the different versions of themselves. Uh, it would have been nice to see that version the first time around. No, no, the third Mitt is the best Mitt of all."

Alright then. It's pretty clear there aren't a lot of people on board the Romney train. But he still has some die-hard supporters ready to help him to the finish line.

Chicago Tribune writer Jamelle Bouie writes: "If Romney were the nominee, there's no doubt that he could win the presidency. Indeed, it would fit the pattern of his political career — after losing his race for Senate in 1994, he came back to win a gubernatorial race in 2002."

It doesn't seem like Romney is willing to just fade away. He's expected to address GOP leaders Friday night at the Republican National Committee's winter meeting.