Why Is ESPN Covering WrestleMania? 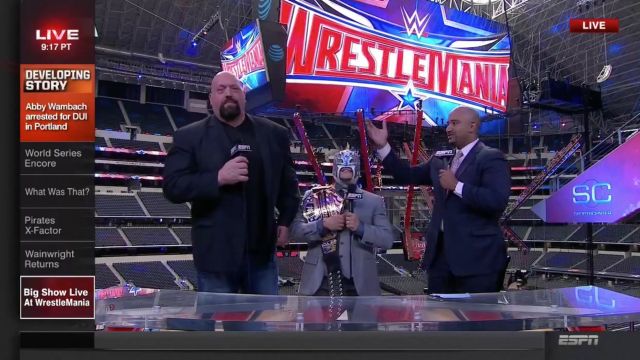 SMS
Why Is ESPN Covering WrestleMania?
By Matt Moreno
By Matt Moreno
April 3, 2016
It's an unprecedented move for ESPN. As many know, pro wrestling isn't exactly real, but ESPN's coverage of it makes sense — at least for the network.
SHOW TRANSCRIPT

"For the first time ever, SportsCenter, ESPN is live at WrestleMania," ESPN anchor Jonathan Coachman said.

In an unprecedented move for ESPN, the network is dipping into uncharted territory — WWE coverage.

ESPN is covering WrestleMania 32 in Arlington, Texas — a move that's got casual sports fans scratching their heads and thinking "is the WWE really considered a sport?"

Sorta. It's the worst kept secret in all of sports, but pro wrestling is scripted and, dare I say, fake. So why's ESPN covering it?

Well, it's also no secret ESPN is looking for new ways to engage with fans ever since cord-cutting has taken a bite out of its business. And the network higher-ups believe the fans want WWE content.

And it's not like sports fans need to know a brand-new list of stars. Some of the biggest names — like Brock Lesnar and Roman Reigns — have real, and lengthy, sports pasts.

And Coachman, who is handling most of the network's coverage, was a WWE commentator prior to joining ESPN in 2008.

ESPN has yet to announce just how extensive its WWE coverage will be in the future, but if Sunday goes well, turnbuckle jumps and chair smashing could be a regular fixture for the network.

This video includes images from Getty Images and Mshake3 / CC BY 2.5.