Why Is Boko Haram Pledging Allegiance To ISIS Now? 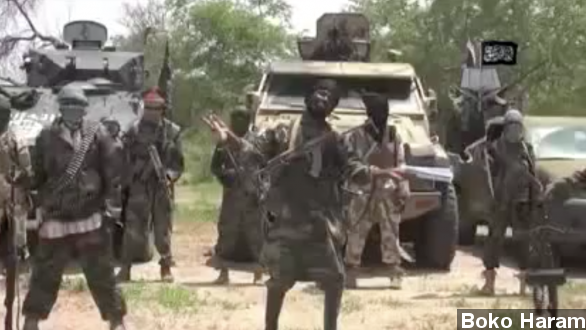 SMS
Why Is Boko Haram Pledging Allegiance To ISIS Now?
By Christian Bryant
By Christian Bryant
March 7, 2015
The Nigerian-based terror group has almost mirrored ISIS in its reign of terror, but why is it just now declaring allegiance?
SHOW TRANSCRIPT

In their mission, their image, and their reign of terror, Nigerian-based jihadist group Boko Haram has almost mirrored ISIS.

And now, it's official: in an audio recording, a person who is believed to be the leader of Boko Haram, Abubakar Shekau, pledges allegiance to ISIS and calls for, quote, "Muslims everywhere" to follow suit.

The move isn't totally surprising considering Shekau has previously accepted ISIS's leader, Abu Bakr al Baghdadi, as Khalif or leader of ISIS's self-proclaimed Caliphate. But Boko Haram could be the deadliest group to pledge allegiance to ISIS so far, signaling what CNN called a possible "marriage from hell."

There have been growing similarities between the two groups in recent months and even shout-outs, if you will, from Boko Haram to ISIS.

Take for instance Boko Haram's "Harvest of Spies" video, which we've described as a not-so-subtle nod to to ISIS. But it's tough to say why Boko Haram is declaring their allegiance now.

It could be a sign of the group's growing desperation. Nigerian officials said in February the Chadian army, along with a coalition made up of military forces from surrounding countries, had made strides in pushing Boko Haram out of some towns and villages.

"We've dispersed them completely and prevented them from re-gathering."

But the group hasn't slowed down just yet. Boko Haram was suspected of carrying out a series of bombings in the Nigerian city of Maiduguri Saturday, killing at least 50 and injuring dozens of others. (Video via Al Jazeera)

The jihadist group hasn't really shown much interest in linking with ISIS before now. They control a large portion of Nigeria and even declared their own Islamic caliphate last summer.

Just this week, a political and risk analyst told NPR Boko Haram hadn't linked themselves to ISIS because of the Nigerian-based group's regional focus.

"I think they don't have any wider aspirations, as ISIS does, of a global umma or caliphate," Kayode Akindele said.

Boko Haram's recent announcement seems to go against that.

There's been no word as to whether ISIS will accept Boko Haram's pledge, as they've done with other jihadist groups. And an unnamed U.S. intelligence official told NBC he's unsure if ISIS would link themselves to Boko Haram because, "The Arab world is incredibly racist ... They don't see black Africans as equivalent to them."

But if they do, this means ISIS's caliphate has extended beyond the Middle East to parts of Africa. A Frontline reporter wrote in November of 2014 pledges from other jihadist groups increase ISIS's ability "to both recruit foreign fighters and carry out attacks in territories far from its self-declared caliphate."