Why Is AMC Making A 'Walking Dead' Companion Series? 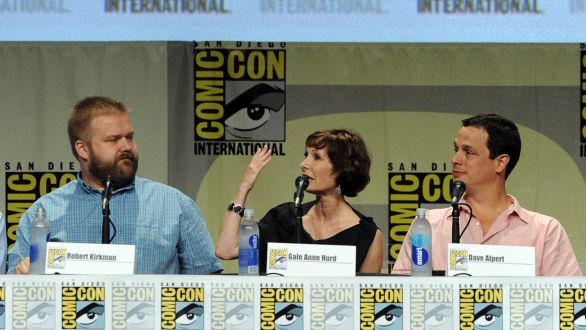 SMS
Why Is AMC Making A 'Walking Dead' Companion Series?
By Ben Lawson
By Ben Lawson
September 5, 2014
AMC has ordered a pilot of a new series set in the same universe as the megahit "The Walking Dead."
SHOW TRANSCRIPT

AMC apparently hopes "The Walking Dead" can give life to a companion series. The cable network announced Friday it has ordered a pilot for such a show.

The new series will be set in the same zombie apocalypse as AMC's existing megahit, but don't expect to see any familiar faces. This show will follow an entirely new cast of survivors in a new — but likely still terrifying — part of the country.

Robert Kirkman, the creator of the comic series on which the TV show is based, will be the executive producer of the show itself. He wrote the pilot's script alongside former "Sons of Anarchy" writer Dave Erickson. Kirkman is also pulling over "Walking Dead" executive producers Gale Anne Hurd and David Alpert to produce the new show with him.

This pilot has been in the works for a while now. Kirkman teased his plan for the show to IGN back in October, saying:

"It definitely won't be set in Georgia, I can at least say that. It's important to us that this show exists on its own. The spinoff has to be a show worthy of existing, or else we've all sold out."

AMC seems to be making a habit of using existing hits as a starting point for new shows.

It announced a spinoff for another little show called "Breaking Bad" earlier this year — although that show, dubbed "Better Call Saul," was given a straight-to-series order, unlike this new "Walking Dead" project.

The Wire points out with extremely successful shows such as "Breaking Bad" and "Mad Men" ending their runs, AMC seems desperate to keep that momentum going.

The Hollywood Reporter writes season four of "The Walking Dead" averaged 18.4 million viewers and captured the coveted 18-49 age demographic. So it's easy to understand why AMC would want to capitalize on that success.

There's no word yet on if or when fans will get to see this pilot, but season five of "The Walking Dead" starts up again Oct. 12.