Why Indian Women Are Standing Up For Their Right To 'Bleed' 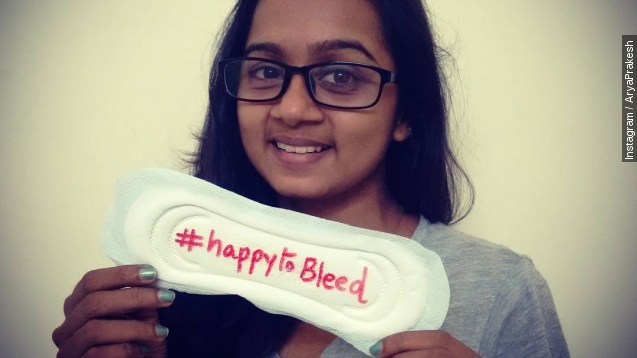 SMS
Why Indian Women Are Standing Up For Their Right To 'Bleed'
By Melissa Prax
By Melissa Prax
November 25, 2015
Women in India started a campaign to destigmatize periods after a Hindu temple board president made a comment about menstruating women.
SHOW TRANSCRIPT

Women across India are sharing photos of themselves in a social media campaign called "Happy to Bleed."

They're trying to start a conversation about periods after a temple board president in India said he wanted to have a menstrual period scanner for women before they could enter a Hindu temple. (Video via Jaihind TV)

In India, women are generally allowed to go to Hindu temples, but aren't supposed to go when they're menstruating. Of course, that's hard to enforce.

Even though it's a long-standing tradition, Indian women are speaking out now.

It started with an open letter that quickly went viral from a woman who identified herself as a "young bleeding woman," saying her period shouldn't be a "sin" at the temple.

"Society has changed over the ages, so religion also needs to change," Nikita Azad said.

This particular temple, which the board president was referring to, bars women between the ages of 10 and 55 because they have periods.

While the tradition holds that women who're menstruating are "impure," there's some irony in that logic.

There is a Hindu temple dedicated to Goddess Sati, who is a menstruating goddess. That temple is closed for a few days each year as she menstruates.

Indian women are joining the ranks of women like Kiran Gandhi, a London Marathoner who ran without wearing a tampon to destigmatize periods.

Correction: A previous version of this video showed Sikhs in a Sikh temple instead of Hindus in a Hindu temple. This video has been updated.