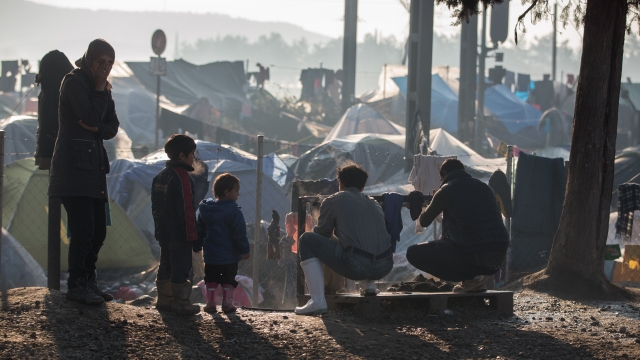 SMS
Why Human Rights Groups Oppose The EU-Turkey Refugee Deal
By Melissa Prax
By Melissa Prax
March 19, 2016
The European Union and Turkey have a deal to send back refugees and migrants who don't have legal papers, but human rights groups don't like the plan.
SHOW TRANSCRIPT

A new deal will send back some of the Europe-bound refugees and migrants crossing the Aegean Sea from Turkey to Greece. But human rights groups say it creates problems.

International Organization for Migration said from the start of the year to March 17 alone, nearly 144,000 migrants and refugees made it to the Greek islands.

The European Union and Turkey made the deal, which goes into effect Sunday. It aims to reduce the number of refugees pouring into Greece without legal papers.

Refugees or migrants who haven't been approved for asylum will have to go back to Turkey. In return, Turkey will receive $6.6 billion to help refugees within its borders.

But human rights groups say the deal will harm those who are forced to return.

Humans Rights Watch said, "All refugees in Turkey are struggling to find work, educate their children, and build dignified lives — essential elements of a 'safe' refuge."

Amnesty International called the move a "blow to rights." The organization said the move "fails to hide the European Union's dogged determination [to] turn its back on a global refugee crisis, and willfully ignore its international obligations."

The United Nations agrees a solution was needed but says implementation could be tricky and "refugees need protection, not rejection."

Although there are several ways for refugees to enter Europe, Greece is a main point of passage. And it's estimated that Turkey has taken in more than a million Syrian refugees in the past five years.