Why Heidi Klum Is The Reigning Queen Of Halloween 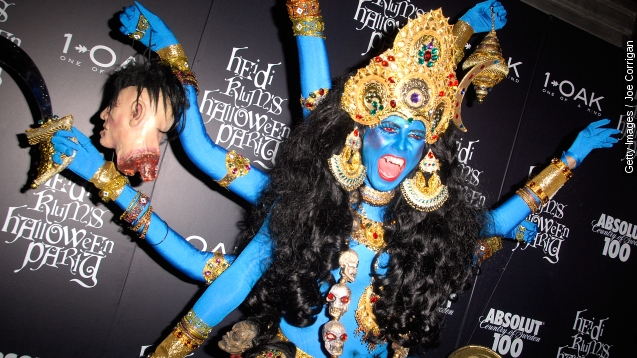 It's not just a bunch of hocus pocus for Heidi Klum. She's the reigning queen of Halloween, and her track record of costumes is, well, freakishly fabulous.

Emerging from the cocoon of crazy is this giant butterfly costume she wore in 2014, which came with prosthetic bug eyes, body paint and giant wings.

And is this someone's grandma? Nope. It's Klum's 2013 costume, fit with varicose veins, liver spots and a cane. But if you weren't looking for Klum, you'd never know the difference. (Video via NBC / "America's Got Talent")

Never mind the ape costumes from 2011, back in a time when she and Seal were still together. They were monkeying around all night (sorry, couldn't resist).

And I don't think anyone will ever forget her bizarre purple robot outfit on stilts from a 2010 party. After all, the model is almost 6 feet tall, but sure, why not add another foot or two with some stilts?

Or ... this. The moment she arrived on a stretcher at another 2011 party as a human cadaver — haunting my dreams forever. (Video via The Telegraph)

Now that she's giving us some teasing posts on Instagram, we're begging to know what she's cooking in her cauldron this year.

Let's pick apart her Instagram: Based on this picture, we can tell there's something protruding from the top of her head and semi-formed boobs with punctured holes.

Honestly, it looks like she's going to join the Teletubbies — but that costume definitely doesn't look like it will be as cuddly as its BBC counterparts. And we're pretty sure you don't need a face mold to make a mascot head. (Video via BBC / "Teletubbies")

She could potentially be creating some insane unicorn costume, which would make the thing coming out of her head make a little more sense — but the semi-formed boobs are throwing me off.

Whatever it is, Heidi, we can't wait to see what you've come up with this year — just please, no more human cadavers.