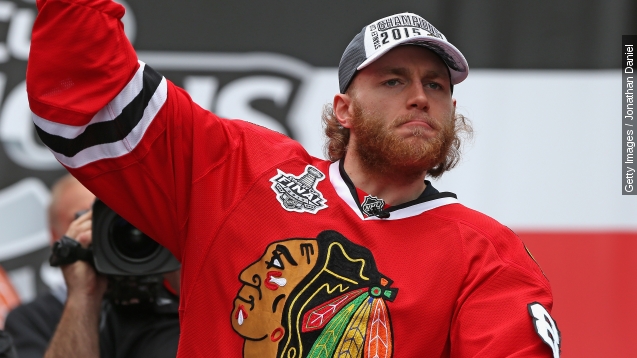 SMS
Why Hasn't Blackhawks Forward Patrick Kane Been Suspended?
By Matt Moreno
By Matt Moreno
August 13, 2015
According to multiple reports, Patrick Kane is the subject of a rape investigation. He hasn't been charged, but the NHL can still suspend him.
SHOW TRANSCRIPT

Chicago Blackhawks winger Patrick Kane is continuing to keep a low profile as police reportedly investigate him for rape allegations in the Buffalo, New York, area.

And it sounds like the Blackhawks are following suit for the time being.

Aside from a brief statement from the team when news broke of a possible police investigation, the Blackhawks haven't done much to distance themselves from one of their star players.

And for Chicago Tribune columnist David Haugh, that's a problem. He writes, "In the post-Ray Rice era of professional sports, a first-class franchise such as the Hawks cannot allow a player facing serious allegations to represent it until more clarity about the case exists."

In the now infamous Ray Rice ruling, the NFL was blasted when it originally suspended the running back for two games after he was arrested for hitting his wife.

"I got it wrong in the handling of the Ray Rice matter," NFL commissioner Roger Goodell said.

The NFL eventually extended that to an indefinite suspension, even though charges against Rice were dismissed.

But so far, Kane's only major backer that's distancing itself is EA Sports. Kane, along with teammate Jonathan Toews, were set to appear on the cover of the video game "NHL 16." Now, just Toews will appear.

In October, the NHL suspended L.A. Kings defenseman Slava Voynov indefinitely after he was arrested for a domestic dispute with his wife. Voynov was suspended the same day as his arrest. (Video via KCAL)

And since there's been no arrest nor any Ray Rice-esque elevator video released to the public, the Blackhawks and the NHL might wait a bit longer — even though the league doesn't have to.

The NHL can suspend a player for conduct "detrimental to the League or game of hockey," so an arrest or charges aren't necessary.

Blackhawks training camp begins in about month, though it's still uncertain if Kane will be on the ice with the rest of the team.