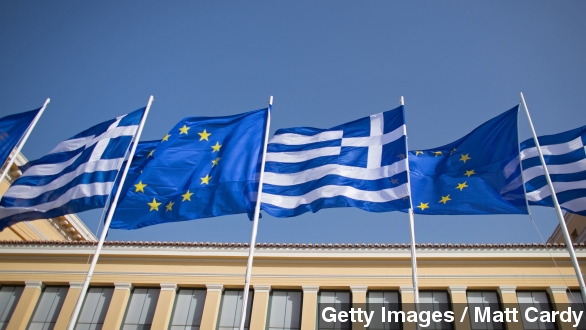 His government sent its official request to the Eurozone Thursday morning to have its loan agreement extended for another six months. (Video via Parliament of Greece)

Greece needs the money to avoid defaulting on its debts, but it doesn't want to stick to austerity measures that Europe, Germany in particular, has attached to the loans.

Those austerity measures have led to big cuts in government services, and that's compounded Greece's growing unemployment. Anger over the situation led to Tsipras's anti-austerity party Syriza's victory in the last elections. (Video via RT)

But now Germany is rejecting that request, with the country's finance minister quoted by the BBC as saying it was not "a substantial proposal for a solution." (Video via Phoenix)

Thursday it looked like the E.U. Commission in Brussels would be more receptive to Greece's proposal than Germany, with the commission's spokesperson saying it could be a good basis for compromise. (Video via EurActiv)

If the E.U. and Greece don't manage to come up with a compromise, the most likely outcome is for Greece to exit the Eurozone, something known as the Grexit. (Video via The Economist)

There were fears of a Grexit happening five years ago, and the measures taken then haven't exactly fixed things.

The Ifo Institute's Hans-Werner Sinn told CNBC: "The rate of unemployment is twice as high as it was five years ago, so obviously all these operations did not work out. It's a mess in Greece, and we have to change the course."

In light of that, some analysts argue a Grexit and returning to its pre-euro currency, the drachma, wouldn't be the worst thing in the world.

For one thing, because the drachma would be much weaker than foreign currencies, visiting Greece would be a lot cheaper, so the country's tourism industry could get a boost. (Video via The New York Times)

But it would also make imports a lot more expensive and paying off foreign debts a lot harder, and that's something Greece has a lot of. (Video via CCTV)

The E.U.'s finance ministers are set for a special meeting on Friday to discuss Greece's proposal.