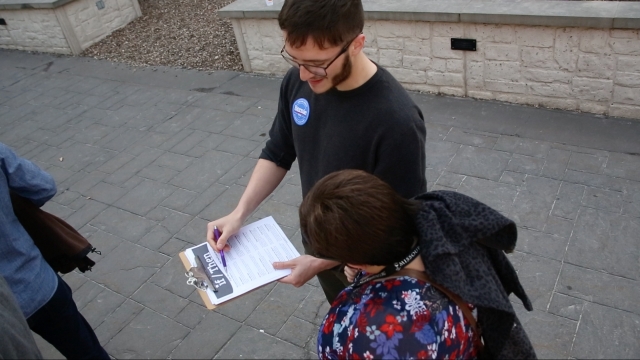 SMS
Why Grassroots Organizations Work For Bernie Sanders
By Melissa Prax
By Melissa Prax
March 6, 2016
We talked to Mid-Missourians for Bernie about the grassroots efforts they made in Columbia, Missouri.
SHOW TRANSCRIPT

"You don't see the enthusiasm you see with Bernie supporters for any other candidate," said Laura Mikytuck, a member of Mid-Missourians for Bernie.

Grassroots organizations are running like campaign offices for Bernie Sanders.

Like this one in Columbia, Missouri, that's now getting help from the actual Sanders campaign.

That's different from other presidential candidates.

"Columbia, I think, is very unique. ... It's really our community is incredibly supportive of this movement," Mikytuck said.

But the key may be progressive pockets — especially in otherwise conservative states.

"We've been trying to set up what we've been doing here in Jefferson City, and the community there is just not as willing to step up,"  Mikytuck said.

Social media is crucial for a lot of these grassroots organizations.

"The national media and mass media doesn't cover Bernie Sanders the way it does the other candidates, so we kind of have to create our own coverage of him, and that's where we go: to the social media,"  Mikytuck said.

"You see a lot of enthusiasm for Bernie Sanders online, and we just hope that transfers over into people showing up."

Mid-Missourians for Bernie used the local True/False Film Festival to get their message out.

"And we thought this crowd — documentary lovers, probably well-educated, artsy — they're like Bernie supporters," Mikytuck said.

"And if you have a solid base of really dedicated volunteers that's all it takes. Just keep showing up."