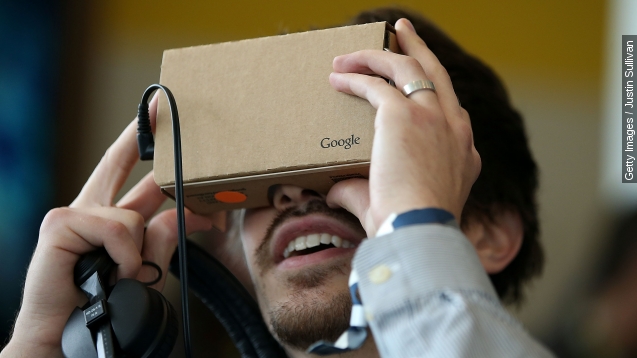 When you see someone with over-sized goggles on, swatting at unseen enemies, there’s a good chance that person is experiencing a virtual reality. (Video via Android Authority)

VR has become more common and more popular in the past couple years, thanks in part to Google and its Cardboard project. (Video via Tested)

So it’s no surprise that Cardboard took home the Grand Prix award for the mobile category at this year’s Cannes Lions International Festival of Creativity.

The cardboard contraption debuted at Google’s 2014 I/O conference. And by early December that same year, the company shipped more than 500,000 of the phone-based VR gadgets.

And today third-party manufacturers have made and sold more than 1 million VR viewers — made out of cardboard and other (less literal) materials. (Video via Cannes Lions International Festival of Creativity)

Cardboard isn’t the only VR option on the market but it is by far the least expensive to buy or make, which won Google big points during the festival’s judging.

After speaking with the festival's mobile jury president Ad Age wrote, “Cardboard won because it enabled a type of technology that was low-cost and widely available ... Cardboard gave 'mobile new possibilities to really change behavior and have a huge impact on consumer life.'"

And it's going to keep having an impact, especially after this year's Google I/O announcement.

"We want to put professional, previously impossible tools in the hands of any creator who's motivated ... Today we'd like to preview something that we call Jump," said Google Vice President of Product Management Clay Bavor.

Google Jump takes video shot with this 360-degree camera rig and combines the footage into one video. The result is a stereoscopic VR experience that can be viewed using Cardboard. (Video via Digital Trends)

That camera rack isn't nearly as inexpensive as the Carboard setup. But by their powers combined VR will continue to be accessible to the masses at a fairly affordable price.