Why 'Ghostbusters' Casting Rumor Has Our Hopes Up 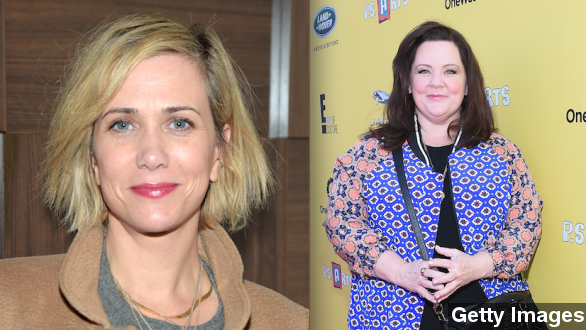 SMS
Why 'Ghostbusters' Casting Rumor Has Our Hopes Up
By Lauren Zima
By Lauren Zima
January 27, 2015
McCarthy, Wiig, McKinnon and Jones are in negotiations to star in Paul Feig's movie, but some media may be jumping the proton gun.
SHOW TRANSCRIPT

Who you gonna call?

Kristen Wiig, Melissa McCarthy, Kate McKinnon and Leslie Jones. If you're Paul Feig, that is. The director sent out photos of the four comedians on Twitter Tuesday.

While outlets like E! seemed to confirm that the four were definitely in for the movie with their headlines on the story...

Industry media like Variety were careful to clarify the four are "in negotiations" for the movie.

And after enduring the trauma of the back-and-forth casting news about Aaron Sorkin's Steve Jobs biopic, we're afraid to get our hopes up.

To clarify, I ain't afraid of no ghosts. Just afraid of these women not actually being the Ghostbusters.

"I can't wait to get a look at this thing." (Video via Columbia Pictures / "Ghostbusters")

As a reminder, this would mark the first reunion for Feig, Wiig and McCarthy since "Bridesmaids."