Why Footage Of This 'Whiplash Squid' Is So Rare 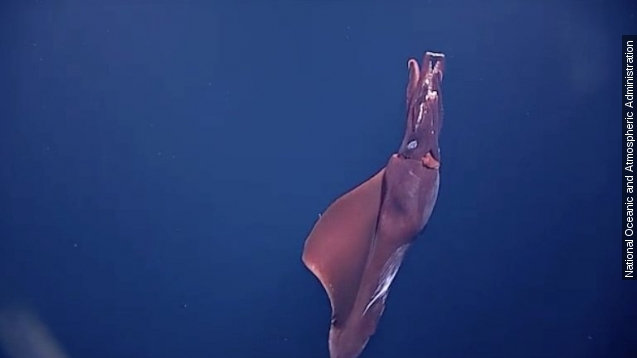 SMS
Why Footage Of This 'Whiplash Squid' Is So Rare
By Ryan Biek
By Ryan Biek
December 6, 2015
Not much is known about the whiplash squid captured in this video. It lives so deep in the ocean that it's rarely seen alive.
SHOW TRANSCRIPT

Researchers off the coast of Hawaii captured spectacular footage of a type of squid rarely seen alive. (Video via the National Oceanic and Atmospheric Administration)

What you see is known as a whiplash squid. The film was released in September but is just now getting popular.

"What looks like those red lips, that's where water is taken in and ejected. ... It's used for propulsion to propel it backwards," one of the researchers said.

And, as Quartz notes, the squid has an organ that emits unusually bright light, which is thought to stun predators and prey.

Whiplash squids live so deep in the ocean that there's rarely a chance to study them. Scientists are hoping this video will spark more interest in further study.