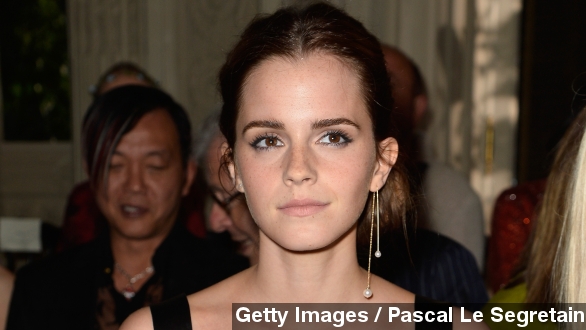 Disney finally has its Beauty. Actress Emma Watson is taking on the role of Belle in the live-action version of "Beauty and the Beast."

Watson made the announcement Monday on Facebook: "It was such a big part of my growing up, it almost feels surreal that I'll get to dance to 'Be Our Guest' and sing 'Something There.'"

Disney has really been on the live-action remake bandwagon lately.

It's bringing Cinderella and her glass slippers to the big screen in a new movie starring Lily James this March. (Video via Walt Disney Studios Motion Pictures / "Cinderella")

"They're made of glass?"

"And you'll find they're really comfortable."

But will Watson help Disney rake it in at the box office like its other successful live-action movies in the past couple of years?

In 2014, The Wrap reported "Maleficent" starring Angelina Jolie made over $700 million worldwide at the box office.

And the 2010 Tim Burton-directed "Alice in Wonderland" grossed more than $1 billion worldwide.

We're thinking Watson has a pretty good shot. Unlike the majority of child stars, the "Harry Potter" actress has had plenty of success as she's gotten older. (Video via Warner Bros. / "Harry Potter and the Deathly Hallows: Part 2")

In just the past year, she graduated from Brown University, starred alongside Russell Crowe in the successful biblical film "Noah," and as a UN Goodwill Ambassador she launched the HeForShe campaign for gender equality.

And then there's the fact "Beauty and the Beast" has been tremendously successful for Disney.

According to Box Office Mojo, the 1991 animated film has grossed almost $425 million since its release. It also won two Academy Awards.  (Video via Buena Vista Pictures / "Beauty and the Beast")

And a stage production of the film ran on Broadway for 13 years.

This is the first casting announcement for the live-action remake since Deadline announced Disney was in talks with a screenwriter for the film back in March 2013.

Production for the live-action movie begins later this year.