Why Egypt Rolled Out The Red Carpet For Putin 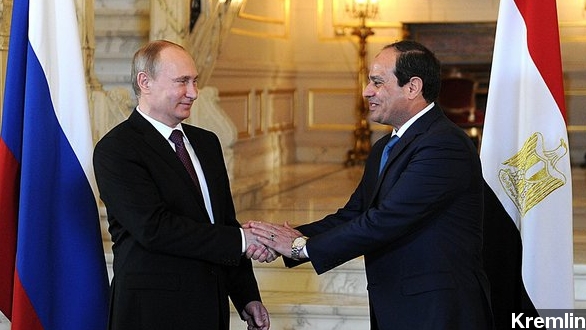 It was a hero’s welcome. A 21-gun salute, a military parade, a red carpet. You name it, Vladimir Putin got it. (Video via ERTU)

Labeling him a "hero of our times," the pages of Egypt's flagship newspaper were filled with photos of Russia's often bare-chested president ahead of his two-day visit to Cairo.

Officially, the visit is all about strengthening political and economic ties between the two countries. There's a $3.5 billion arms deal on the table and a trade agreement for Putin to discuss with his counterpart, Abdel Fattah el-Sisi.

When it comes to optics, the visit is a win-win for both men.

Putin, under pressure from the crisis in Ukraine, would really like to demonstrate he's not totally isolated on the world stage. (Video via Kremlin)

And as one Putin biographer told The Guardian, "It's also a way of undermining the US, since Cairo is piece of America's imperium."

As for Sisi, his meeting with Putin provides an opportunity to show Egypt isn't reliant on the United States for assistance. (Video via ERTU)

He'd probably like to see a return to the way things were during the Cold War when Egypt enjoyed close ties with the Soviet Union. (Video via YouTube / TheBookArchive)

Because ties with Egypt's other major ally aren't so hot. The Obama administration is frustrated with Sisi over his harsh crackdown on dissent. Last year, it briefly held up aid and military shipments to Egypt. (Video via ODN)

This video includes an image from the Kremlin.