Why China's Economy Is In Trouble 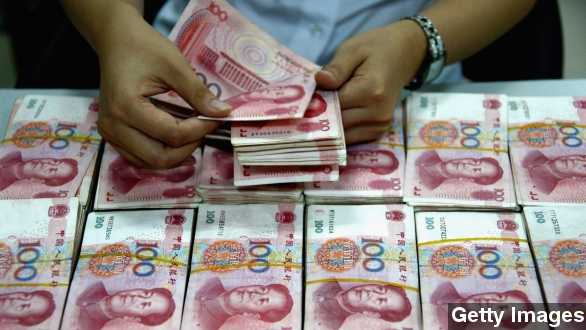 For decades China has been known for its rapid expansion, with nearly 10 percent growth making it the world's largest trader and second largest economy.

But a move by China's central bank on Friday suggests the country's economy is sleepier than you might think.

In a surprise move, the People's Bank of China announced it was lowering interest rates, an action typically taken to bolster slowing economies. (Video via Euronews)

So why is a country that makes up almost 17 percent of the world's purchasing power slashing interest rates? It's worried about its growth.

Both the growth and inflation in China this year are likely to come in below the government's official targets of 7.5 percent and 3.5 percent respectively.

And as The Wall Street Journal's Bob Davis notes: "Western business people and international economists in China warn that the government's GDP statistics are accurate only as an indication of direction, and the direction of the Chinese economy is plainly downward. The big questions are how far and how fast."

One major factor contributing to China's slowdown is the debt it accrued, increasing by 73 percent over the last five years. (Video via Blue Ocean Network)

As the International Monetary Fund noted, in the past 50 years only four other countries have seen their credit grow that fast that quickly: Brazil, Ireland, Spain, and Sweden. All of those countries faced banking crises soon thereafter.

That's led many observers, including The Economist, to call on China's leaders to take steps to strengthen its economy.

But no one was expecting the Chinese central bank to act this quickly, and the fact that it did, helped propel both the Dow and the S&P 500 to record high closings on Friday. (Video via CNBC)

The Chinese central bank downplayed expectations of further stimulus measures, pledging to continue on what it calls a "prudent monetary policy direction."

This video includes images from Getty Images and Tom-B / CC0 1.0.