Why Catalonia's Independence Movement Is Far From Dead 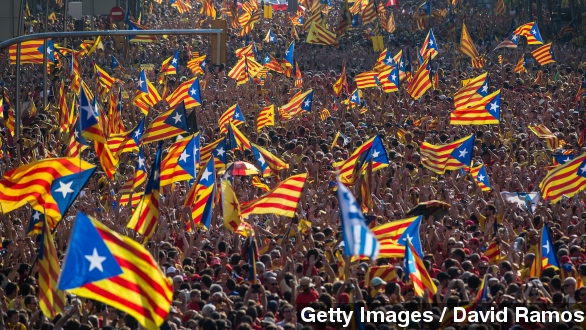 In the wake of the Scottish referendum last year, Catalonia held its own referendum and overwhelmingly voted for independence from Spain.

Some 80 percent of voters in Catalonia's November referendum voted to break away from Spain, but the central government called the referendum illegal, and only 1.6 million of the 5.4 million eligible voters took part. (Video via RT)

Now Catalonia's president — yes, it has a president — wants to hold a different type of referendum through recognized parliamentary elections in September. (Video via Libertad Digital)

President Artur Mas hopes parties backing independence will win out, the two biggest of which are his own Democratic Convergence of Catalonia party and the left-leaning Esquerra Republicana party.

As The Financial Times points out, although political disagreements between the two have kept them from running together, Spain's "ruling conservative Popular party and the centre-left Socialists risk being sidelined by the pro-independence movement."

And that appears to be how the Spanish government, under Prime Minister Mariano Rajoy, views the whole movement of Catalan independence: a risk. (Video via Antenna 3 Noticias)

That's at least partially because Catalonia is an economic powerhouse — the region is the biggest contributor to the country's economy. About a fifth of Spain's GDP comes from Catalonia. (Video via Voice of America)

Given Spain's continuing economic crisis, the loss of such an economically important component could further destabilize things, although the election is probably bad news for the central Spanish government either way.

As The Economist notes, the much more progressive Esquerra Republicana party is popular, and its leader has threatened a unilateral declaration of independence from Spain.

Catalans will decide their fate when they head to the polls Sept. 27.