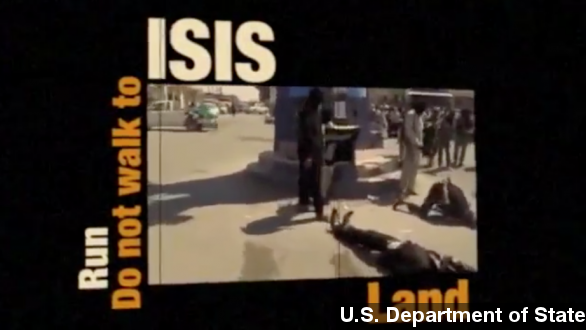 "It offers nothing but misery and death and destruction," President Obama said.

"Their message of hate is being challenged," U.S. Secretary of State John Kerry said.

"They are not Muslims. They are monsters," United Kingdom Prime Minister David Cameron said.

The group is despised across the globe.

So why does the West's anti-ISIS messaging come off as kind of ... lame?

It's hard to understand why the U.S. government can't seem to come up with effective counters for ISIS propaganda — especially considering creating anti-ISIS PR should be really, really easy.

And yet, the whole U.S. effort online basically consists of bizarre low-budget videos like this one ...

... and a collection of social media accounts with the not-very-catchy message: "Think Again, Turn Away."

Of course, the problem there isn't just with the message but also the messenger. And even U.S. officials acknowledge that.

"We all know the government is probably not the best platform to try to communicate with the set of actors who are potentially vulnerable to this type of propaganda and this kind of recruitment," Nicholas Rasmussen, director of the National Counterterrorism Center, said on C-SPAN.

But you just have to wonder how ISIS videos can have this kind of production value.

It's not as if the federal government doesn't have the resources. Even that "Star Trek"-themed IRS training video would have been an improvement.

Of course, there are alternatives. Some critics of the U.S. messaging say the State Department's most effective videos are those that feature Muslims speaking out against ISIS. But, as long as it's under that Department of State logo, many potential jihadists recruits likely won't be listening.