Why British Elections Are Less Obnoxious 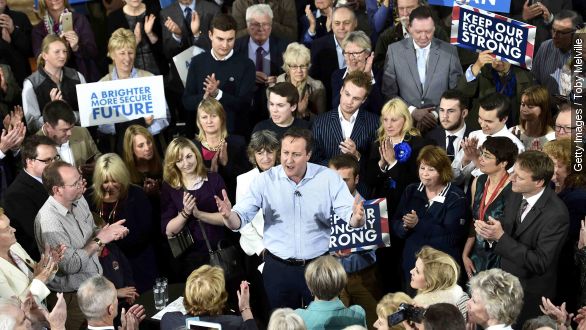 The U.K. is gearing up to vote in its closest general election in decades. And we've gotta say, the whole affair has been pretty ... chill. (Video via Conservative Party, Labour Party)

By American standards, anyway. When it comes to elections, here are three ways the Brits do them better.

Their elections are shorter — much, much shorter. (Video via U.K. Parliament)

"I've just had an audience with Her Majesty the Queen following the dissolution of parliament. The general election will be held on May the 7th," Prime Minister David Cameron said. (Video via ODN)

By contrast, in the U.S. the first major 2016 candidate to announce did so a whopping 596 days before the election. Other candidates quickly followed suit. (Video via Ted Cruz for President)

Bottom line, with no primary system, U.K. campaigns are nowhere near as drawn-out. Or expensive. (Video via U.K. Parliament)

By every measure, U.K. elections are cheaper. (Video via U.K. Parliament)

Across the pond, there are strict limits on how much is spent. Per campaign period, parties are limited to spending about $29.5 million. (Video via UKIP)

And they rarely do. Combined, the three major U.K. parties spent just over $44 million in the last election.

To put that into some perspective, the 2012 U.S. presidential campaign topped $2 billion. A lot of that money went into ads like these. (Video via PBS)

"When Mitt Romney and Bain closed the plant, I lost my healthcare and my family lost their healthcare. A short time after that, my wife became ill. ... And she passed away in 22 days."

Flip on the TV in the U.K. and you won't hear anything quite like that.

U.K. elections are less nasty. At least, on television. (Video via U.K. Parliament)

Out with the ominous narrator and in with the cute children — and boy bands. (Video via Labour Party, Green Party)

We should point out the U.K. has imported one of our electoral traditions  — holding U.S.-style, televised debates.

So much for decorum. (Video via BBC)