Why Are Teens Taking The #CondomChallenge? 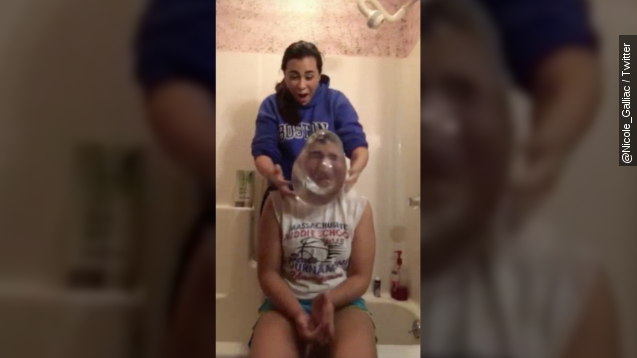 If you've seen the #CondomChallenge, you may be wondering if young people have forgotten how to use the prophylactic entirely.

"Dude, that was lit," a challenge participant said.

The challenge is this: You fill a condom up like a water balloon and then it encapsulates your head. One's head is magnified. Hilarity ensues.

Some have likened it to the ALS ice bucket challenge and suggested the condom challenge raises awareness for safe sex.

And it can sometimes demonstrate the strength and expansion potential of latex, which could be enlightening for men who might be averse to using condoms for fear of sizing issues. (Video via Trojan)

Some outlets credit the first instance of the challenge to a video titled "Japanese Condom Head Challenge" in early November.

But there was an earlier — and perhaps even more perplexing — condom challenge back in 2013. It involved snorting condoms until you're able to pull them out of your throat.

And, unsurprisingly, doctors are concerned about the latest way to use a condom — without using a condom? One doctor told The Huffington Post there was "a significant risk of injury and suffocation." Even the Twitter account that curates the videos warns: "Be Safe! Remember to pop the condom."

For the record, that advice does not apply to safety recommendations for the intended use of condoms. (Video via Durex)

This video includes an image from Steven Depolo / CC BY 2.0.