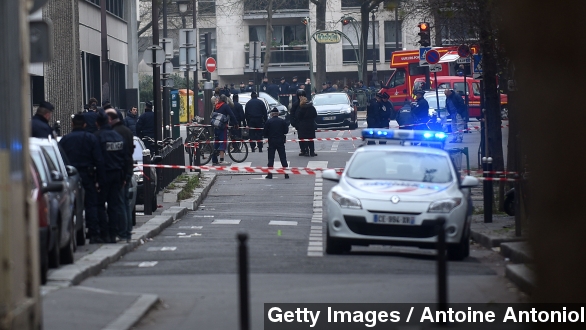 SMS
Why AQAP Officially Claimed Responsibility For Charlie Hebdo
By Cliff Judy
By Cliff Judy
January 14, 2015
Al-Qaeda in the Arabian Peninsula had already unofficially claimed responsibility for the Paris attack at least five days ago. So why go official now?
SHOW TRANSCRIPT

Just hours after millions of people stood in line and bought up every last copy of the latest Charlie Hebdo edition, an Al-Qaeda branch most had assumed for some time was involved with the attack on the magazine officially claimed responsibility.

Al-Qaeda in the Arabian Peninsula — or AQAP — released a video several minutes long Wednesday morning with the senior leader of the terrorist branch praising the attacks by brothers Cherif and Said Kouachi.

Along with the video, a translated excerpt with a cover depicting the Eiffel Tower dissolving read, "the one who chose the target, laid the plan and financed the operation, is the leadership of the organization."

The attacks on Charlie Hebdo left 12 dead, along with five more people killed over the following days as French police tried to hunt down the Kouachi brothers and another man who claimed to be connected to them. (Video via Sky News)

The attackers claimed they were taking vengeance for the satirical magazine's publication of cartoons of the Prophet Muhammad. (Video via France 24)

But why claim responsibility now, a week after the attacks, when virtually every finger so far had already pointed at AQAP?

Just one day after the attack, The New York Times quoted a senior American official who said Cherif Kouachi had traveled to Yemen to train with AQAP.

During Friday's standoff with police before he was killed, French TV station BFMTV aired a purported phone interview with Cherif.

Translated statement: "I, Cherif Kouachi, was sent by al-Qaeda in Yemen."

Finally, The Intercept reported an AQAP source claimed all this last Friday — five days ago. While the media outlet noted it wasn't an official claim of responsibility, an AQAP official tweeted out the same statement just after the The Intercept published its story.

The answer perhaps lies in protocol. Terrorist organizations aren't typically shy about claiming responsibility for attacks regardless of whether they provide solid evidence to back up the claims. Then again, maybe it's just about money.

The third man in last week's attacks, Amedy Coulibaly, pledged his allegiance to ISIS in Syria and Iraq — not AQAP. Coulibaly killed four people in a standoff at a Paris grocery store before dying in a gunfight with police. (Video via BBC)

The Intercept noted on Monday AQAP and ISIS have been in a bitter feud since the militants in Iraq and Syria broke away from their Al-Qaeda brethren.

"Taking responsibility for the attacks, whether true or not, could aid either group in fundraising and in elevating its prominence in the broader jihadist movement globally."

AQAP praised Coulibaly's actions, but said they only "coincided" with the attacks on Charlie Hebdo.