Why Angels' 'Disappointment' Over Josh Hamilton Got Blasted 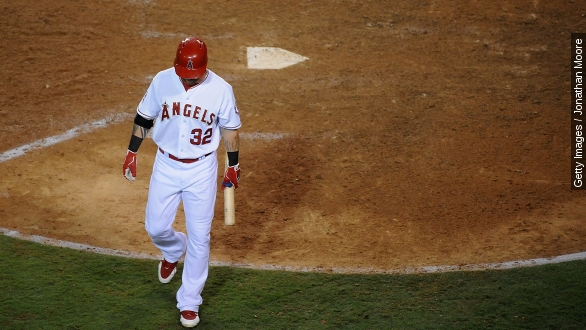 SMS
Why Angels' 'Disappointment' Over Josh Hamilton Got Blasted
By Cliff Judy
By Cliff Judy
April 4, 2015
A decision that Josh Hamilton did not violate MLB's substance abuse policy led to what some are calling unnecessarily negative comments from the team.
SHOW TRANSCRIPT

With an arbitrator's decision that Josh Hamilton will not face suspension for self-reporting drug abuse, Major League Baseball and the Los Angeles Angels faced the incredibly difficult position of how to react.

And based on the headlines that followed said reactions, they failed.

A little background, Hamilton told baseball and the Angels in February he suffered a relapse in his long-running battle with drugs and alcohol, this time supposedly with cocaine.

The league was widely expected to suspend the Angels outfielder, but a four-person panel couldn't reach an agreement and the case went to the arbitrator who ruled Hamilton did not violate the league's substance abuse policy.

After explaining the arbitration process, MLB Commissioner Rob Manfred's office wrote he disagreed with the decision.

The Angels went further. The team's president wrote, "It defies logic that Josh's reported behavior is not a violation of his current program."

Angels General Manager Jerry Dipoto also expressed he was "disappointed" in Hamilton's commitment to the team. Those words came before Dipoto said the team was committed to helping Hamilton through this struggle.

That comment came across to many as insensitive. Longtime Hamilton teammate and current Angels starter C.J. Wilson called the team statements "disheartening" and said he'd rather focus on the helping Hamilton part. (Video via Head & Shoulders)

One writer for SB Nation posed a list of rhetorical questions on who the team's statements could possibly benefit and labeled the Angels front office execs as "petulant children" for airing their feelings publicly.

Hamilton's manager Mike Scioscia did seem to have his player's well-being in mind.

"The most important thing is Josh and getting himself where he needs to be," Scioscia said. "You know, addiction is a terrible thing, and he's trying to deal with that." (Video via Fox Sports)

But the hard truth is that managers — unlike the front office execs — need only worry about the well-being of his players and how they perform on the field, not what their salary is. And Hamilton's is huge.

There is perhaps no player in baseball today with a more tragic dichotomy of talent and personal struggle than Hamilton. The first overall draft pick in 1999 by the Tampa Bay Devil Rays, Hamilton's career looked like a flop after multiple positive drug tests and suspensions.

But he got himself clean and resurrected his career during five seasons with the Texas Rangers, at one point even winning the American League MVP. That led to his current five-year, $125 million contract with the Angels. (Video via Wilson Sporting Goods)

Hamilton has time and again credited his religious faith with getting clean from testimonials at stadiums to interviews with "The 700 Club" and more.

But Hamilton's play hasn't lived up to his massive contract to this point, and he's owed about $25 million this year — money he wouldn't receive if he lost playing time due to a suspension.

Not everyone is blasting the league or the team. USA Today's Bob Nightengale wrote Hamilton needs help and the league should tell him to stay away from the game for his own good when he finishes rehabbing a shoulder injury.

The current timetable for when Hamilton will return from his injury is unknown.