Why An Icy Handshake Could Mean Progress For China And Japan 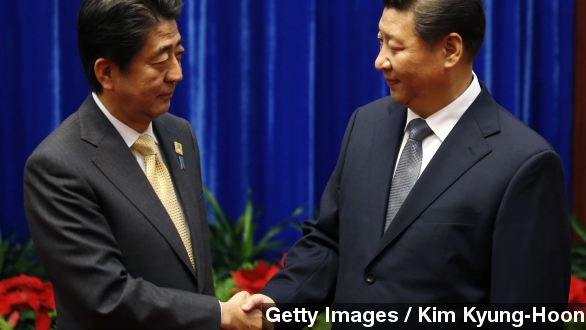 This icy handshake has a lot of significance for the balance of power in the Asia-Pacific region and relations between regional leaders China and Japan. But to get an idea of just how awkward the handshake was, you kind of have to see it in motion.

China's President Xi Jinping met Japan's Prime Minister Shinzo Abe for the first time on Monday during the APEC summit in Beijing, and the tension was palpable. Just look at Xi's face! (Video via Arirang)

That expression reflects years of mutual provocation and hostility going back to Japanese occupation of China — and atrocities it committed there — during World War II. Most recently, though, most of that tension has focused on one issue.

The uninhabited islands, which have a total area of less than 3 square miles, have led to everything from naval posturing to name-calling — partly because of potential natural resources, but also pride. (Video via Press TV)

So that explains the tension in that handshake, but what about the significance? It is just a handshake, after all.

Well, the main reason is it's seen as a start.

PRIME MINISTER SHINZO ABE VIA NHK WORLD: "The talks became the first step for Japan and China to improve ties in the spirit of a strategic relationship that is beneficial to both sides."

And the two sides have a real economic interest in sorting out diplomatic ties.

MARTIN PATIENCE VIA BBC: "There's been an economic cost to the political differences between the two countries. Japanese foreign direct investment in China has tumbled. China, it wants to sell its goods to Japan."

In the meeting following the handshake, the two discussed the possibility of a new way to avoid conflicts at sea by streamlining communication between China and Japan.